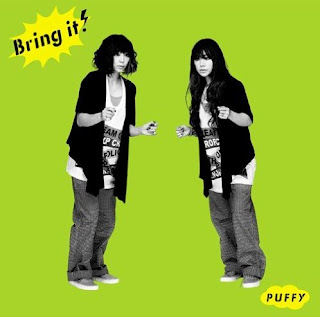 Well it feels like I'm taking my own sweet time with this, so I'd better write something up.

This is PUFFY's first album in a year and nine months - a seriously long time for them. Worth the wait?

I'd say yes. But (there's always a "but") this still isn't the PUFFY of old, which is probably pretty much gone forever at this point. There are at least some nods to the past on this album, though, which were sorely lacking from their last full-length release honeycreeper. These throwbacks are not always successful - sometimes it feels like the two of them are grasping for something that's no longer within their reach - but occasionally they hit it just right, and for at least a brief moment it feels like 1999 again.

Which isn't to say that there's nothing to like about the new-style PUFFY on this album. As with honeycreeper, there's a lot of hard rock and some of it's just as catchy as anything else they've ever released. There's also some jazz, some punk, and some light rock - complete with horn sections. This album's got variety, and that's something we really haven't heard from them on an original album in in a while now.

I'm gonna surprise some of you now: I love "I Don't Wanna". Yes, even though it's written by Avril Lavigne, and even sounds like her singing. You know, something happened to me on our last Japan trip. As we were walking through the Algonquins offices (Algonquins is Japan's largest punk clothing brand for girls), picking out clothes to sell, they were playing Avril Lavigne on the office stereo. And it made total sense. Three of us, all in our late thirties and two of us guys, walking through an office building in Tokyo looking at punk clothes for girls and listening to Avril Lavigne. It was kind of absurd but completely perfect. I got it.

That doesn't mean I'd ever listen to her here. She fits in perfectly with Japanese culture, where street cred is basically meaningless and cute is everything. So I understand the Japanese fascination with her. And that makes it a lot easier to listen to PUFFY singing her songs.

I still don't like "All Because of You" - a bad song's still a bad song, and that's still a soulless piece of tripe that just sucks the life out of me whenever I hear it. But "I Don't Wanna" is fun. It makes me want to sing along, and it did from the first time I heard it.

Other highlights for me: the previously-released "My Story", Kazuyoshi Saito's "Hare Onna", and the cover of "Wedding Bell", which, surprisingly, sounds like vintage PUFFY to me. This is the one "retro" song on the album that doesn't sound like consciously reaching back, but which I could actually picture on one of their early albums. The way they sing it makes all the difference - it's neither that screeching hard rock style they've had lately, nor is it the self-consciously cutesy mousey voicing they sometimes do when trying to sound like they used to. They really just sound... younger. Without even trying. And the song is fun! I miss the fun of the older PUFFY albums after the more serious Splurge and the occasionally outright dour honeycreeper.

I'm also trying to convince myself that I like Sheena Ringo's (that's how she spells it here!) jazzy "Shuen no Onna", and I think that I do, but it's gotta seep in a little bit. This is another song that at least invokes the old PUFFY, though it doesn't have quite the same feel. Sheena's other track "Hiyori Hime" has already been reviewed here, and my thoughts on it haven't changed much.

As with honeycreeper, there's one track near the end of the album that sounds like PUFFY repeating themselves. In this case, it's "Anata to Watashi", which sounds like a poor-man's "Talalan" combined with another song that I know I know but can't place. Same rhythm, same vocal style, same horns. It's such an obvious similarity that I know someone else will chime in.

The rest of the album I could probably live without. I know, seems like almost half the album, and it's true that I find myself skipping a lot of songs. "My Hero" comes close to being good (and it's from Andy Sturmer's old bandmate, which is interesting), but it's just too simple and basic of a tune, and too repetitive. "Bye Bye" is just nothing at all, it never really gets started. "DOKI DOKI" and "Twilight Shooting Star!" were both reviewed previously and I didn't much like them then. And "Bring it On!" is another punk track, but this one doesn't sound very convincing. And the production of it is grating and shrill.

I would not say this is PUFFY's best album. But I appreciate certain things about it maybe more than I actually like the songs themselves. I like the fact, first of all, that there's only one cover on this album and it's a bonus track. I also like the fact that they're trying to get out of this hard rock rut that they were in for a little while - there are definitely a lot of different styles here. In that way, it is more like the older albums than the more recent ones. The problem is the music just isn't as good, and that comes from working with all these disparate songwriters who don't always know their working styles that well and who aren't experienced in getting the best out of them. It's always hit or miss. (They got a little lucky with Splurge, which clicked as well as any album like this could.)

I think they're probably between a rock and a hard place, and doing the best they can right now. On the one hand, they really can't go back to who they used to be - they don't have the same personnel, so it wouldn't work even if they tried. On the other hand, they can't go too far in a new direction or their fans will get restless, as I think started to happen with honeycreeper. At the same time, their budgets can't be what they used to be. The best they can really do is work with all these different people, many of whom I'm guessing are doing it out of friendship, try to give the fans at least a little of what they expect and hope some magic happens sometimes.

The special edition of the CD comes with a near full-length DVD of their live performance from the "GO WEST" tour in 2005, shot at the Fillmore in San Francisco. I have to say that on a purely selfish level, I'm a little disappointed that they didn't instead include the New York show from the "GO EAST" tour that same year, which I know they also filmed (we were warned before going in) and which, I can say without hesitation, was a better show. (And no, it had nothing to do with the fact that Yumi was making non-stop eye contact with me all through the show! See my first-ever post about PUFFY, which originally appeared on my old non-PUFFY blog, here.) Ami herself said on her blog that that was the best show they'd ever had - and no, she doesn't say that to all the cities!

This DVD reminds me in some ways of "Rolling Debut Revue", which probably sounds harsh to those of you who've seen that, but I don't really mean it to be. They do seem a little bit out of it, though, and disconnected from the crowd. No doubt they were a little nervous, as I don't believe they'd been back to the US at this point since "Rolling Debut Revue". I would have actually preferred to get the rest of the Shibuya AX show that was included with the previous three singles - it was a better show (at least on DVD) than the concert at the Fillmore.

Actually, having said all that, watching this show makes me a little wistful. It wasn't the same show or technically even the same tour as when I saw them the first time, but it was only a few months in between, the set list and stage setup was the same, and of course it was the same year. It takes me back, even if I do claim that my show was better. I was never more into them than I was at this point, I don't think they were ever better than they were at this point, and I wish that I could have just frozen that moment in time.

(screenshots of the DVD coming soon.)

CD
Music: B-
Production: B-
Performance: B+

DVD
Music: A (still love the set list)
Production: B- (it's pretty lo-fi by today's standards)
Performance: B- 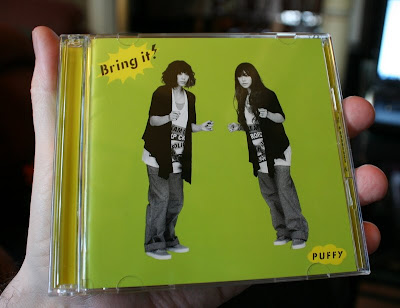 I'll have my review in a couple of days - haven't even finished listening to the CD the first time yet.

On another note, I know I'm not posting as much these days. I just don't have a lot of time anymore, what with the new business my wife and I have got going on. We actually just got back from Tokyo last week, on a combined vacation/buying trip, and stuff's just been happening so quickly that I can barely keep up lately. (I do still have a full time job too!) Doesn't leave much time for this blog, unfortunately, or for keeping up with PUFFY in general as much as I used to. I honestly feel almost like an outsider at this point.

I did look for PUFFY merchandise while we were there, but didn't find much of anything that I didn't have. They've been out of the public eye a bit even there for a little while now, so I didn't see nearly as much PUFFY-related stuff as I did last time. By contrast, Kimura Kaela was everywhere. (She also has an album coming out this month.) I wish I'd taken a picture when we went to Kinokuniya - literally every other magazine cover in the women's fashion rack was a shot of Kaela.

Anyway, I'll have a review of Bring It! up soon, along with some screen grabs from the DVD. (Yes, the limited version does have the green cover.)
Posted by Jeff at 4:08 PM 5 comments: