The PV for Happy Birthday.

P.S. Re-did the embed as the original was pulled from YouTube.
Posted by Wes at 11:07 AM No comments:

Here is the translated track list for Thank You (via cdjapan):

With a fair amount of tracks that have not been released, I am very excited about this album. Dareka Ga seems to have been left out, which is a shame as I liked that single.

I back ordered Happy Birthday and Thank You... the limited DVD editions, so I should get my order from cdjapan in early March.
Posted by Wes at 3:52 PM No comments:

Coming March 9 is the New Puffy album Thank You. I am guessing that the sentiment ties into their 15th anniversary, the theme seems to extend to the forthcoming single Happy Birthday, which ships a month earlier.

The listed songs on cdjapan are for Thank You are RGW and Happy Birthday in addition to 12 more that are currently unlisted. I imagine some recent singles and their b-sides will be thrown into the mix, which given that many of us really liked them that it should be a very interesting album. 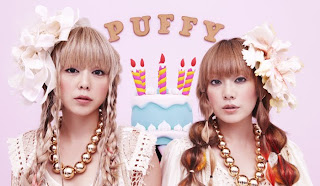 The single Happy Birthday is being released February 9th, the deluxe version will have a DVD with more Gekidan Asesu tour footage. Here is the track listing for the single and bonus DVD:

When I know more, I will pass it on. It is going to be an expensive month or two... in a totally good way.

Also Puffy's official website has gotten a new look, check it out. I think the redesign is very nifty.


P.S. A gigantic version of the above pic can be found here... another cool 1t anniversary entry background pic here... of course all images are copyright Sony/Ki oon

P.P.S. Thanks to amiyumidas readers PUFFYsanjo for the heads up and tbb for the cd/dvd track lists)
Posted by Wes at 3:21 PM No comments: