I somehow have a feeling this is going to be every east coaster's last, best chance to see Puffy live. 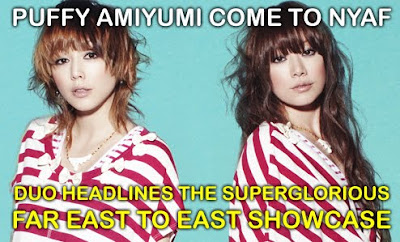 Puffy are coming to the New York Anime Festival (nee Comic Con) this fall. Hard to believe, but this will be Puffy's first appearance in New York City since 2006. Why, I remember that show like it was yesterday...

But this is not only a concert. Say the organizers:

Puffy AmiYumi will be appearing at the New York Anime Festival and New York Comic Con throughout the weekend for panel discussions and autograph signings before taking the stage on Sunday night at Irving Plaza. Tickets to FETES are $22 in advance and $25 at the doors. Tickets can be ordered at Irving Plaza's Box Office or via Ticketmaster starting July 9th.

Panel discussions and autographs! Sounds like they're trying to make up for lost time here.

The ticket prices for the concert event are quite reasonable, however I'm sure you'll need to buy tickets to NYAF separately for the discussions and signings.

As I've got a business to run these days, I actually can't guarantee I'll be there - but I'm buying tickets on the 9th, and I'm gonna try my best.

UPDATE: Tickets are now on sale!