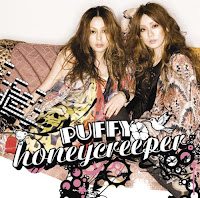 In many ways Spurge was expected to be a great album, Ami and Yumi pulled out the stops and delivered an experience that encompassed their first decade as a duo. But how does honeycreeper serve as the bookend for another decade of Puffy? As it turns out... remarkably well.

Honeycreeper is a multiple composer and producer album which is not uncommon with Puffy particularly at this stage of their careers. Despite having so many moving parts in production honeycreeper is an integrated listening experience the tracks flow well from one to another. To me it is an album that plays best from start to finish, sans randomization in one sitting. The track layout is superlative.

Sometimes an album can be defined by what is missing, which is not always a bad thing. It is noticeable that Andy Sturmer is nowhere to be found on honeycreeper. I am not sure how I feel about this and I will leave it at that. Also missing are solo tracks by Ami and Yumi. Which I think is okay. Ami and Yumi are talented enough on their own, but the magic that is Puffy only occurs when they sing together and sometimes their solo tracks do not work well for me.

The lead in track for honeycreeper is best summed up by Ami*, "Oriental Diamond makes you feel like 'Here Puffy comes!' “ Even before looking at the credits it screams Tamio Okuda. It is also is the only track he participated on for honeycreeper. Which if Tamio can only have one song on a Puffy album, this is a really great one to have. It is a fantastic lead in track. Oriental Diamond has mostly a rock focus but like many of Tamio’s Puffy contributions it is hard to pin down one specific influence which exemplifies why Tamio Okuda is the best Puffy collaborator.

The arrangements and production for Oriental Diamond are top notch and Ami and Yumi both deliver stunning vocals via harmony and in-and-out singing. To me this is the spiritual snap back to Asia no Junshin and no surprise that penultimate Puffy song was by Tamio Okuda as well. What might might surprise you, this is my second favorite song on honeycreeper.

Ain’t Gonna Cut It is Butch Walker’s marriage of 60’s girl pop and rock which delivers a fun yet unhappy song. I think some of the metaphors for failed love might be a bit off, but it is a song I enjoy. It is well arranged but maybe just a hint of being over produced particularly on the instruments. Ami and Yumi both sound very natural and deliver a good vocal flow to the track.


Kimi to O-tobai to me has a late 70’s rock feel in both engineering and delivery. Think more like The Knack or early Cheap Trick for sound design , there is an open feeling to the sound. The song itself I think is a touch padded in but overall I like it in regards to Ami and Yumi’s vocal delivery and musical flow.

Where other tracks by Puffy might be purely cute, purely honest or purely fun… Kuchibiru Motion is pure sex. The corresponding video from the single I enjoy because it reflects the sexy fun of the track and usually Ami and Yumi don’t particularly eschew to sexy in a such a straightforward manner. That makes for a nice change up stylistically. Kuchibiru Motion may not be the most intricate song, but the lyrics are great and the song is fast, fast, fast!

Hayai Kurima feels a slightly like a space filler, but it is not a bad song. I like the fact that Puffy’s vocals are raw and under produced. This makes sense given it is by Mashima Masatoshi from The Blue Hearts which is a band whose style to me is not overly engineered. Their impact upon Puffy is also noteworthy. Hayai Kurima's placement on honeycreeper is a good bridge between Kuchibiru Motion and Sayonara Summer but it is listenable on its own.

A poppy ballad, Sayonara Summer is well placed. Ami and Yumi sing very well on the track and the sound comes off as tightly produced. It is not a remarkable song to me and is not one I dive into my pool of music for, but it is nice sounding and that is enough. not every track can or will be a homerun.

Boom boom beat is another fast rocker, which you would think would be a song I would immediately glom onto… but there is something missing. The back story is the Merrymakers churned this out very quick and it feels this it did not expand when it went to production. It is a song I like, but I think it could have been a song I love had it been filled out. Again boom boom beat plays against the happy Puffy image, which is something I do like about this track.

If I had to describe Youkai Puffy I would dub it a barn burning rocker meets Skooby Doo meets a 50’s beach monster movie… on meth. The track starts off with a radio skit which even given my lack of meaning ful Japanese linguistics skills, is fairly straight forward. After reading a translation, it is hilarious… not only as a bit but as a corollary to Puffy’s good girl pop image.

The back half of the Youkai Puffy track is the song itself . While it is self referencing which under other circumstances I intensely dislike. For Youkai Puffy this works as everything is a reference to ghost Puffy in the skit. While the skit might be a touch slow to play out, once the song starts… hang on! The flow of Yokai Puffy is really remarkable. It feels all over the place between screeching synthesizers, screaming vocals and up and down tempos… yet it all ties together like Ami and Yumi’s vocal cords in their delivery. This is my favorite song on honeycreeper, Kankurou and Tomizawa craft a Puffy song that is stunningly different yet maintains the qualities of a Puffy song all the same.

Somewhat buried on honeycreeper is Closet Full of Love and of the two Butch Walker contributions this is the one I like more. It is also the one that became a single, so maybe there is something to that line of thought. I think the metaphor’s here while maybe reflect a less ambitious effort, are also better. Closet Full of Love is an interesting combination of hopeful and personal fears in regards to love, when married with a straightforward rock/pop template is a song that delivers the goods.

The second contribution by Blue Hearts’ Mashima Masatoshi, Hasanjiyauze is very different sounding and mimics an earlier Puffy sound. It is a very drum and synthesizer heavy track, bass and guitar are mostly far in the background. End result is a fun track that would not have been out of place ten years ago yet still sounds fresh.

Complaint, like Sayonara Summer is by Yamanaka Sawao. It is less polished but it is also a faster paced rock track and continues in a theme of the second contribution by a composer on honeycreeper being the better song. Ami and Yumi are in harmonic lockstep and sound great. I would also suggest that complaint has a throwback Puffy sound and would not have been out of place ten years ago. It is not a complex arrangement, and instruments are guitar heavy and I cannot pick up a trace of synthesizer on the track.

Ohedo Nagareboshi IV is a silly song crafted by The Merrymakers for Puffy. Like Oriental Diamond this is a very Puffy song and also is the second song by a composer which I like more. The sound in Ohedo Nagareboshi IV is a mix of girl Japanese pop with a 60’s girl ground undertone, particularly in the chorus. The women in my life love this song and dance along be they six or thirty six. I do like it, but via osmosis... I had no choice.

The last track of honeycreeper is Island which is more than a bit inspired by Celtic folk music. Like Youkai Puffy it is a more experimental track and it honestly leaves me flat. That is not to say it is not well executed, it is not my cup of tea.

Honeycreeper wound up being a surprise for me. Had it been a let down I would not have been surprised as Splurge was a great album. Ami and Yumi in many ways deliver an effort I liked more than Splurge, but this could never have been released as a tenth anniversary album either. Splurge I thought best represented Puffy’s collective sound for their first decade. Honeycreeper is a rocking kickoff to their next decade and me represents a focus that I want to hear more of.

Final Grades:
Music: A
Production: A
Performance: A+

A quick post up. A clip from Countdown Japan 0910. Ami and Yumi are in pretty good form, though they go off key at a couple points their energy is great. I am not sure how I feel about their current band, I was just getting used to the last one... Anyways, enjoy Asia no Junshin... I will be doing final edit for the next album review and hopefully get that posted up on Monday.

(h/t to bonsaipark for finding the vid)