Once in a blue moon I find a fun rarity on Youtube. Not exactly sure where and why this version of Wild Girls On Circuit was used as the official PV is very different. It looks a notch above normal TV appearances, but there are some little items (like a car jump off the track and veering towards Ami's feet) that suggest this was a limited take (perhaps even one) performance.

P.S. Due to leave for Japan tomorrow via Singapore. Sadly the J-Music selection in Singapore has trickled down to nothing over the past years, so I am not surprised.  Not a lot of down time, but music shopping is on the list. If I get inspired or see Puffy related stuff I will post up.

P.P.S. More thinking about an expanded blog, now just a matter of starting the graphics work with another freelancer I know.
Posted by Wes at 7:45 PM No comments:

After a modest hiatus Puffy is back with the Datsu Dystopia single.  The album cover(s) are nicely shot but do not really convey much beyond Puffy is back.  The upside is both Ami and Yumi look terrific and their new look works.  Hopefully this is a sign they have stepped away from the hobo fashion culture that they have been sporting for a few years (to be fair that just may be a Japanese fashion trend they were compelled to follow).  This review is covering the regular single, but almost everything is applicable to the deluxe version. 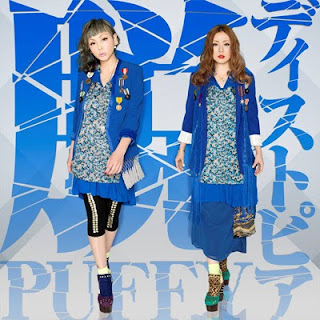 Datsu Dystopia is not a bad song, it simply is not the song I wanted.  Not like I get to vote. There are a lot of elements I like and the electronic influences and over the top synthesizers are fun changes.  Unfortunately the things I do not like about the track balance out the things in the positive column.  The pace of the song feels staggered and a touch manic, which doesn't quite work for me.  Ami and Yumi do a decent job singing, but at points it feels like the instruments overwhelm their performance.

My Journal is a solid b track and probably closer to what I like hearing from Puffy.  It probably is not as well engineered song as the title track but the weird part is that it is probably the better song and were it tightened up a little it probably should have been the a track.  I found myself enjoying the guitar focused instrumentation more than the synth heavy lead track.  More importantly there is a throwback feel to My Journal which is a better feel for what Puffy has done musically over the past decade and a half.

Ultimately after the hiatus Datsu Dystopia is not what I was waiting for and it doesn't leave me wanting for more.  I think the contracts with Dareka Ga in that was a single most of us can agree was a great single and created an enthusiasm for Thank You.  As with Dareka Ga I would be surprised if Datsu Dystopia made it onto the next album. If it does I won’t mind but I also do not want the that album to sound like Datsu Dystopia either.

Scorecard
Music: C+
Singing: B-
Instruments: B
Engineering: A-


P.S.  Have a happy Independence Day.

P.P.S. I will hopefully post something up before I leave for Singapore and Japan, but I just might post up while I am overseas if I find some fun Puffy inspirations.  No luck on reaching out to Puffy, but I did not have high hopes to begin with.

P.P.P.S.  Strong odds I will be spinning another blog from Amiyumidas,at some point. Not am issue with Puffy at all, just that there is so much more I would like to talk about regarding Japanese music that is not Puffy.  You'll still see me kicking out content here, I promise. :)