The big news - here's the deal

The big news announced at 8AM today was that PUFFY's going to be doing a cover of a 1980 hit called "Wedding Bell" that will also be used as the theme song for a prime-time TV drama. And "Wedding Bell" will appear on their forthcoming album Bring It! And it sounds like it may in fact be their next single too - it'll be released as a ring tone on May 2, with the release of the full song (to mobile phones) a few weeks later. No word on whether a packaged release is coming (separate from the album, that is), so it may or may not be an actual single. They may be seeing how it goes.

Now, all this probably is fairly big news in Japan, where a lot of their fans likely grew up with this song and where having a prime time TV theme song is a big deal. And it is good news for them. I'm obviously looking at it from a little different perspective, so I can't help but be slightly disappointed that the "important news" today was the announcement of yet another cover song after we just had an album full of them (I'm officially suffering "cover fatigue"). My big hope was for word of a world tour, or some "Bring It!" artwork, or a new TV show (starring them), or some song samples or something.

Guess all that'll have to wait.

By the way, if you're curious, this is "Wedding Bell":


Depends on what PUFFY does with it, I suppose. Maybe they'll call in Enapou and go all "Nantettatte Idol" on its ass.

UPDATE: Well, not quite. Here's PUFFY's version (thanks Bonsaipark!):

"Important news" Monday at 8AM?

Just a heads up that Puffy have announced... something... coming at 8AM on Monday. That's only about 9 hours from now given the time difference. Check their site later to see what they've posted.

Of course, I'll have some commentary on it here, whatever the news is.

By the way, I've been trying hard to get my hands on a copy of the latest Soup Cruise, on which Puffy appears on the cover, but have had no luck - my local Japanese book stores aren't carrying it this time. If you want to see the pics from it, though, just head to the Sumairu Puffy BBS.
Posted by Jeff at 10:33 AM 2 comments:

You may have seen this weekend that Puffy have announced a collaboration with clothing retailer Uniqlo that involves eight t-shirt designs for eight corresponding songs on the upcoming album BRING IT!. Supposedly they'll even be available overseas - though I don't really believe that. Uniqlo generally doesn't sell the exact same products in the US as Japan. (Sizes are different, for one thing.)

Anyway, they also mentioned that you might see the first t-shirt if you "type in UNIQLO". Well, try it - doesn't really work. You need to actually go to the Japanese version (not the US version!) of Uniqlo's "UT" site, which is not easy to find on Uniqlo's confusingly-laid out main web site (I ended up just Googling it and getting there that way). I only realized later that it's right there at the top right - there's just too much going on at that site. 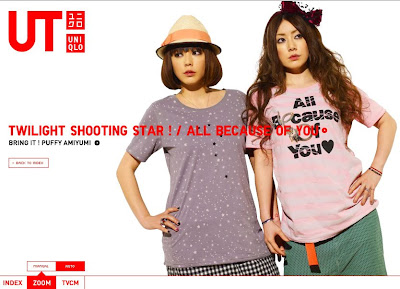 Hopefully they will have a couple geared more towards guys - I think they probably will. And I do at least hope that they'll be on sale here (at least through the web site), because I can tell you from experience that Uniqlo's "XL" in Japan ain't the same as an XL here.
Posted by Jeff at 9:22 PM 2 comments:

Well, that's about all we know so far. That and a release date: June 17. Pretty soon! And about what I expected after the tour date announcement.

Quick update: I should check my email once in a while! CD Japan already has some more details:

Arrrrrrrrrrgh - why can't the 2005 footage be from the show I went to?? Well, in any case, it should be great - though it's strange that they're mining a tour four years ago for footage. How about giving us the rest of the Shibuya AX show from last year? Well, I shouldn't be so picky.

The title... are Ami and Yumi gonna don boxing gloves for the cover? It's a little weird. But whatever. I kind of figured that'd be the title after the tour was announced - usually their tour names have some relation to the album titles, and there aren't very many possible variations of the phrase "bring it!"

I'm just happy to have some new music from them, and more than just a single (those shipping costs are adding up!).

CD Japan purchase link to the right. (I appreciate all the orders, those of you who have been using my links!) That "no image" will hopefully be replaced soon.