Q-Pot is a high-end accessory maker that designs accessories modeled after miniature food. They make little cakes and candy and hamburgers and then stick them on keychains or necklaces or just put them on a little plate for decoration. It's weird and cute in the way that some Japanese things are, and now PUFFY have apparently designed their own little Q-Top accessories and made a little video about them to show you.

Check it out - it's worth it if only for Yumi's mocking use of English. (I like her Mr. Burns-esque "Excellent!") Click the image for the video, and visit the web site itself here. Fair warning - clicking the image will open a new window, and the video's available in Windows Media only. Blame Japan's web developers - this is the most common way of doing web video there. 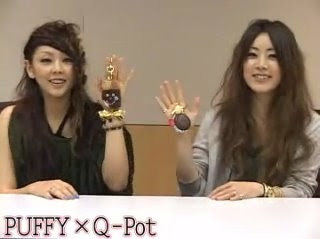 By the way, I notice it's been a week since my last post. Hasn't been a lot of news and I just haven't had time to do anymore video or reviews (both types of post really take a while!). But there's more coming, don't worry!
Posted by Jeff at 6:40 PM No comments:

If only this show were still on!

You've seen clips of it. You've read about its origins. But you've probably never seen a full episode. This show pre-dates ubiquitous broadband, it pre-dates Bittorrent, it pre-dates digital broadcasting (in Japan). It's never been released on DVD or home video of any kind, that I know of. Some of the later episodes were sort of on the edge of all that new technology, so earlier episode clips are even rarer than the later ones. But almost all of the clips you see are copies people made for themselves on their analog VCR's and then captured to their PC's. And there just aren't really all that many out there, considering how long the show ran (1997-2002).

Well, here you go - a full 28 minutes of Puffy being Puffy (complete with commercials). They really are hilarious hosts. This episode dates to probably mid-1998, in the show's heyday - how do I know? Watch the ads!

If you're wondering what's going on in the episode, well, most of it's pretty self-explanatory - but all the dress-up and photography (which is the best part of the episode) is for their then-upcoming calendar. Anyone have the calendar that they ended up making here?


I'm not counting on this staying up forever. I wrestled with whether or not to post it at all. But it's a ten year old episode of a variety TV show that's otherwise lost to the ether. Is it really better if nobody ever sees this again?
Posted by Jeff at 10:04 PM No comments:

Just something quick before I sleep in preparation for another hellish week at work...

Credit goes to tim banana for this - I'd never seen it before he emailed me about it. What we have here are a bunch of clips of Yumi singing solo and with people other than Ami, and songs that I haven't heard before. They're not the greatest songs, and she sounds nervous. But still, this is something different!

Puffy on the cover of SOUP CRUISE

Don't ask me who comes up with these magazine titles. Soup Cruise. Yeah. 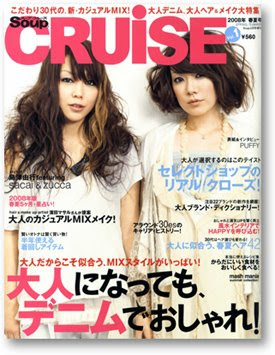 Yeah, there's a lot going on in this video.

If you've been following Puffy long and hard enough, then you're familiar with their variety show "Papapapa Puffy" (or パパパパパフィー, if you prefer) that ran from 1997-2002. But perhaps you've wondered who came up with such a ridiculous title for a major network television show, and why it ever got greenlighted. Well, your answer is below.

One of the longest-running, most influential music shows in Japan is "Hey! Hey! Hey! Music Champ", a sort of comedy/variety/performance show hosted by the duo known as "Downtown". The great thing about this show is that it's funny even if you don't speak Japanese, because rarely do the musical guests just sit and talk (or play) - they have to actually do stuff. Utada Hikaru, for example, was coerced into showcasing her basketball skills during one of her many appearances. I love the show and always have; before there even was a YouTube, it was one of the few Japanese shows we used to get during the "international hour" on one of our local cable access channels. So I've been watching it since very close to the beginning.

But I'd never seen Puffy's 1996 visit when Downtown suggested they have their own show called "Papapapa Puffy", and I'll bet a lot of you haven't either. Well, last November, Hey! Hey! Hey! held a gigantic 500th episode spectacular complete with basically every major pop artist alive and in the country at that moment. As part of that special show, they did sort of a retrospective with some of the artists. Puffy was one of them. Video below, more commentary and a rough translation to follow:

Think there will ever come a time when people get tired of hearing Puffy sing "Asia no Junshin"? I'm not convinced the band is actually playing - I think it's a recording (though the girls are obviously really singing). They do look amazing, though. I doubt you'll see that hair style and color on Yumi again - she had this style for just a week or so and changed it immediately after this show.

The first part of the video goes back to that 1996 appearance (and man, do they look and sound different). Downtown were making fun of the girls and how quiet and shy they were at that time; they make fun of all of their guests. But the gag was they did a little role reversal and Puffy were supposed to be interviewing them on their new show "Papapapa Puffy", and, well, the rest really is history.

When that clip is over, Yumi talks about how they didn't really even expect the show itself to last a year. (I like the part where Ami says "CM!")

I'll have more on Papapapa Puffy in the coming days.

By the way, I should mention the Gosperats for those that don't know them - they're the group of guys in blackface sitting behind Downtown during the present-day interview segment. I always feel a little uncomfortable whenever I see them, though I know the intent is innocent. But I suppose it'd be like a present-day American wearing a bowl-cut black wig and fake buck-teeth or something like that - you'd know they didn't mean it seriously and were just portraying a stereotype, but I'd still expect that a Japanese person might be offended. Anyway, they're so obvious in the video that I thought I should at least acknowledge the potential for controversy. Though most Japanese obviously think nothing of what they do.
Posted by Jeff at 5:46 AM 8 comments:

This is the first teaser of some of the video I mentioned receiving earlier - and I haven't seen this particular performance of "Basket Case" posted anywhere previously. I believe this is the first you'll have seen it, unless you live in Japan and happened to watch it on satellite.

Oh, by the way, while this doesn't work for all videos, YouTube did create one of its super-secret high-quality versions of this one and it is noticeably better. It doesn't work for embedding, but if you've got a little bit of extra bandwidth, go directly to it here.

(You can try that "&fmt=6" modifier with any video on YouTube. It doesn't work with most of my videos yet - they're re-encoding their entire site over time - but check out Nantettatte Idol in HQ. Awesome!)

Honestly, there are even cooler, rarer videos coming, a lot of which are random older TV appearances that I don't yet know quite what to do with. Some of the videos are pretty long, so I'm looking for a free video host that can deal with them. Anyone know of any sites that don't have a 10 minute or 100MB limit?
Posted by Jeff at 9:59 PM 2 comments: