Just a quick update before I get the new single info posted up. I stumbled across this karaoke version from the film Boat on YouTube today and was chortling through out.

Puffy has a new song, "Tomodachi no Wao!", coming out in April for the new show "Shimajiro no Wao!" which airs Mondays on TV Tokyo. Looks like it was written just for the program and I am not sure if a single is being released. I will follow up on that, but I would suspect that at the least "Tomodachi no Wao!" will show up on an album or as a b-side. Takkyu Ishino has written the music and collaborated with Puffy for the lyrics. 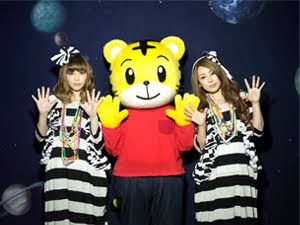 Also Puffy will appear at the end of episodes with the "Kodomo Challenge" characters. (I could use some more information about that...)

In April, Puffy will take to the stage for a concert celebrating Ki/oon's twentieth anniversary at the Liquid Room in Tokyo. More info can be found at http://www.kioon.com/20/


P.S. Sorry for the lackluster updating for the site, I have been busy with a career change and that has shifted my time and energy around in ways that are not very conducive to writing. I am getting back in the swing of things, so bear with me and thanks for all the great comments and news.
Posted by Wes at 9:47 AM No comments: