Quiet & A Couple Of Wallpapers

Not much going on for Puffy news, Ami and Yumi seem to have a bunch of dates over the remainder of the year, but beyond that... little news. Not a bad thing per se, but it does nto give me a lot of blogging material...

Next review I hope will be up late next week... The process is taking longer than I thought. Some of this is due to other commitments, vacation and the wonderful distraction of family. Some of it is almost every album, aside from Bring it!, has been a rediscovery and in some cases changing of long held opinions I held.

It is good fun, but impossible to put a deadline on...

Until then a couple of wallpapers I made a while back.

Credit to the original photographers. 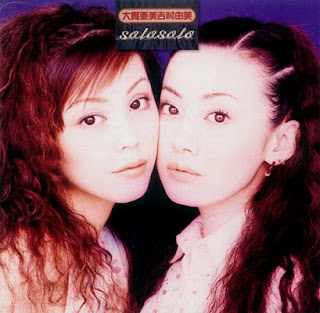 Calling solosolo a tale of two albums might be an obvious point if it were no more than Ami and Yumi each get seven tracks as a showcase of their individual talents as vocalists. There is, however, more to this observation than that worn cliche.

Each half of solosolo also represents different styles of recording which carry over to subsequent albums; Think Jet or Nice versus Splurge or Bring it! as examples of production style. Ami uses a number of producers and collaborators and has a more western set of influences. Yumi's half is helmed by a single producer and a smalled group of collaborators. The end result is that Ami's half is the slightly stronger effort. Some of this is because Ami at this stage in Puffy’s history is more developed as an artist, yet lackluster production Yumi's half of solosolo is also notable.

While a double album split into solo halves is an interesting idea, solosolo is also an interesting album for another reason. Ami’s half was recorded before Puffy was formed. As to when… I would hazard that Ami recorded her half sometime in 1995. It was a shelved solo effort and Ami was in something of a fugue state within Sony Music until she met Yumi. Then as they say, the rest is history.

Solosolo is a great snapshot as to where Ami and Yumi were at as singers before Puffy’s breakout album Jet. Considering Ami’s half was recorded well before Puffy’s formation, it is evident that Yumi’s vocals were not nearly as developed as Ami’s. This surprised me, I had always thought they were very close in regards to talent in their early efforts.

It feels odd to split the review of solosolo into two parts; Ami’s and Yumi. However, both halves represent distinct works that happen to share a CD cover. Let's get to the music itself.

Onnanoko Otokonoko has a 70’s sound that would not feel out of place on, say, the soundtrack for Rushmore. It is a nice enough song but it is not one that sticks. This track in particular illustrates that Ami can simply do things vocally that Yumi cannot, particularly at this early stage. I will say Yumi over time has become a good singer but as shown on this track, Ami had such a head start via her performance and penning four of the seven tracks.

Love Depth… listening to the drums this sounds like a Mathew Sweet song, but as I discovered Ric Menck is the drummer and one of the artists credited for the music. The end of the song sounds exactly like something Matthew Sweet would have done at about the same time. I am on the fence about Love Depth. Given my own musical tastes there is a lot I should like, but it feels a little dated and defined by the mid 90's power pop scene rather than rising above it.

One of those songs I am not sure about is Honey. It is synth heavy and percussions are exceptionally weak, it may very well be a drum machine. As you will see in later reviews, I am hit or miss with Sturmer. I would say when he becomes too exacting the effort feels synthetic and I think Honey falls into that category. Ami’s vocals sound slightly washed out and Honey would have benefitted from emphasizing them more.

That’s Sweet Smile is a well delivered song wrapped in a slight pop throwback package. Like the previous track, That’s Sweet Smile is a slower paced song. Between the two I think this track is miles better. Again it demonstrates where Ami is at even before Puffy was formed.
Be Someone Tonight is an English song and delivers the power pop sound better than the previous confab with Velvet Crush. Ami’s vocals are mostly spot on though I think she sounded slightly flat in a couple parts. The instruments are well balanced against Ami's vocals and I think this is the best overall song on solosolo in regards to singing, music and production.

I would swear Snacks was a Shonen Knife song. Ami’s singing is strong and steady but not remarkable. The music is well played but the engineering is not good. I dislike the bouncing of sound between speakers in Snacks, it is hard to communicate this, it just annoys me when I listen to it.

Tadaima starts off sounding like the Gin Blossoms… I intensely dislike the Gin Blossoms, but then the song combines with an early 80’s ELO sound that makes me forget the part I disliked. Ami’s voice is so very clear and I think displays good range and energy. It is a good enough song that it would make a better Puffy song.

Tennen no Beauty is a song that seems well timed musically, it has a grunge sound that compliments Yumi’s vocal delivery. There is nothing noteworthy about the instruments, which could have been a bit stronger, yet the slightly muted delivery does make room for Yumi, who especially in Puffy’s early days was overshadowed by Ami’s more developed sense of presence.
Tsuyoki na Furari the intro sounds like Yes merged with DEVO, but once Yumi starts in with her vocals another layer is added. It is a great song but the instruments again seem slightly muted and very, very recursive. Not that a looped sound is necessarily bad, but one of the things I have always admired in Puffy’s material is that the musicians have been given room to do their thing. In Tsuyoki na Furari it feels like a slightly phoned in effort.

Hanabi is poppy sort of song. The drums are nice, but it the synthesizers are a little think. Yumi’s vocal delivery is smooth right until she needs to go a little too high which really do not showcase Yumi very well. Hanabi is not really a song I care for, it is a style I am not inclined towards and Yumi’s range is tested and the result is mixed.

Next up V•A•C•A•T•I•O•N which is a fun song… and very much a beach blanket bingo throwback. I also like it because in the Fever*Fever concert footage it is perfectly used as a comic foil. Pizzicato five’s main man Yasuharu Konishi wrote the lyrics and music on the track, which gives it a wildly different sound than the other thirteen tracks on solosolo. I like V•A•C•A•T•I•O•N quite a bit, but I also have to be in the right mood for to fully appreciate it.

I think Yumi’s vocals are strong on V•A•C•A•T•I•O•N , but again when she needs to go high there are some issues but less so than Tsuyoki na Furari. I only note this because I am guessing Yumi received vocal training before Jet went into production, because from that point on she has no problem hitting notes and becomes the powerful vocalist between the duo.

Another fun but unremarkable song, Sorenarini . I thing the synthesizer part of the song does it no favors and is overbearing. Yumi is not displaying much range but her delivery is fine.

Ai no Auro has a 70’s sound at the start and drifts into a more pop sound. Yumi sounds like she is singing in a padded cave. The instruments are muted and the singing is a touch flat. Not a song a particularly care for in regards to styling or sound.

Watashi no Nozomi has a 70’s pop sound and unlike Ai no Auro I like this one by Yumi. Her vocals have more range and a softer touch to them. Some of this may be because she is harmonizing with herself, but it works.

Sorry for being quiet, several other writing projects decided to land on my desk and compiled with some real world things... It does not help that Puffy seems to be in a between albums fugue state.

Anyways I am working on my next couple of reviews and some of those conclusions might surprise you more than they surprised me. Or not... Who knows...

To keep you busy here is a TV appearance of a medley of their songs. Sung live which is a nice change. Nothing notable about the selection, more that I had not stumbled across this particular clip.