Received Puffypipoyama in the mail a couple days ago from cdjapan, so after a few listenings (along with the other stuff I bought) I am ready to review Puffy's latest single coming on the heels of their 20th anniversary.  The question I had when getting into the entirety of the single cd was: is this a run up to the big year for Puffy or a let down? 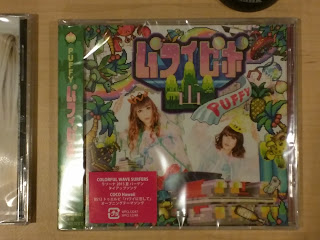 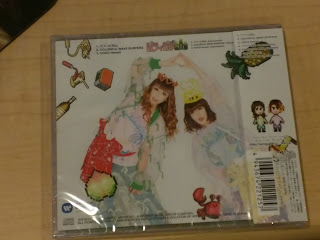 Looking at the packaging as my impression is art from 8-bit retro pachinko machine clip art slapped on top of a fun but re-purposed picture of Ami and Yumi.  The disc itself is dual color print on the top which is somewhere between uninspiring to awful.    The obiwan is nice with an abstraction of the over all art and a cute 8-bit version of Puffy.  The liner notes are basic song lyrics, nothing special but helpful.  The art choices there are a bit odd, the underlying graphics and text over them are not a great marriage. 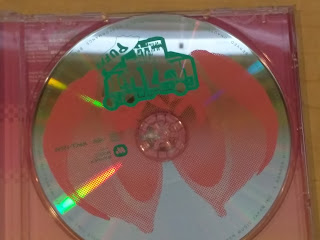 So slot this single somewhere in the Nice Buddy range of single presentations, but as the old cliche goes: don't judge a book by its cover.

The disc contains six tracks, three songs plus the instrumental versions of them.  Of the three principle tracks only the title track Puffypipoyama is a new song.  Colorful Wave Surfers was a previous digital release and COCO Hawaii was a song for the show In Love With Hawaii.

Puffypipoyama is the lead off track and I re-approached it with an open mind.  It sounds like a more synth heavy Datsu Dystopia but as if it was intended for a Dance Dance Revolution game.  I really do not mean that in a flattering manner.  Like some of the more recent Puffy releases there are elements of Puffy's stylings but it is a frenetic mess that never comes together.  As a reader pointed out it feels like them cashing in on the weird Japan meme.  I will give some good marks to the traditional Japanese synthesizer elements, I did like that.

Colorful Wave Surfers is the second track and we drift back into more familiar Puffy territory.  I reviewed this previously so I will not dwell on the track beyond where my opinions are after some time and distance.  To me it is a song that sort of looses my interest as it goes along, but it is still a good track.  I think one of Puffy's strengths has been marrying multiple styles in one song and Colorful Wave Surfers is kind of one note but a well executed one.

COCO Hawaii is the final track and Puffy nails it.  The start is kind of slow and I did not know what to think but then pretty much every element of a great Puffy song is there.  Ami and Yumi both deliver good vocals and the COCO Hawaii picks up a lot of good energy as they progress through it.

The instrumental tracks are basically filler.  Though I would say COCO Hawaii is the one that suffers without Ami and Yumi's vocals but it is neat to hear how the song shifts tempo instrumentally.

After multiple listenings of the Puffypipoyama single I come away with some mixed feelings.  Puffypipoyama is not a good song and represents the unevenness of Puffy's singles since their last full album Thank You.  Colorful Wave Surfers is a decent song and if that is the direction Puffy is going then that is probably going to be an album that is good but not 20 year anniversary good.  COCO Hawaii was a good one off but I am not sure I would want an entire album like that either.

Where are the winds are blowing for Puffy's 20th year?  I do not know and the frustration and dejection you are reading comes as much from that which is a product of uneven material for the better part of five years. Regardless of the unevenness of this new Puffy single they are still active and that makes me happy.

Vocals: B
Instruments: A-
Production: B-

P.S.  I ordered a few other discs from cdjapan, which I wound up being very happy with.  Seagull Screaming Kiss Her Kiss Her's new album (after only a 15 year gap...) Eternal Adolescence is really good.  Also ordered Minmin's Air Girl and her old band Chocolate Chip Cookies' Your World.  Both solid albums as well.
Posted by Wes at 10:55 AM No comments: