Bring It! and other updates

No, I'm not dead. I know, it's been more than a month since my last post. I'm now literally running four blogs (including a professional one for my day job), plus an online store. I'm spread pretty thin right now.

I've missed quite a bit of news. Or rather, some news I missed, other news I didn't miss but just didn't have time to post. Like, for example, this:

In the background, you can hear one of the songs from Bring It! No, I don't know which one. Maybe somebody else does.

What I do know, because it was released like a month ago now, is the track listing to the album. I've never posted it, though, so I may as well do it now:

As previously announced, the limited edition version ships with a DVD of their 2005 concert at the Fillmore in San Francisco.

A few random thoughts on this:

1. No Tamio Okuda! Pretty disappointing. Is this the first time they've ever released an album without either Tamio Okuda or Andy Sturmer contributing at least one song?

2. By my count, I already know (and own) five of the 12 songs through singles.

3. Not one, but two Shiina Ringo songs! Makes me wonder, though. "Hiyori Hime" is not my favorite, either among PUFFY's or Shiina Ringo's body of work. Were they holding back the better song, or is it more of an afterthought?

4. Similarly, two "Butch Walker & Avril Lavigne" songs, which I think we probably know really means two Butch Walker songs, with some vapid teen-friendly lyrics by Avril Lavigne. I don't have my hopes up (especially with a title like "I Don't Wanna").

Overall I am obviously looking forward to it, though I feel a strong danger of slipping into the typecast of one of those annoying fans of any band that's constantly going on about their "old stuff". I hope that doesn't happen.

BTW, the limited edition album cover is (currently) above and to your right - the regular is below. 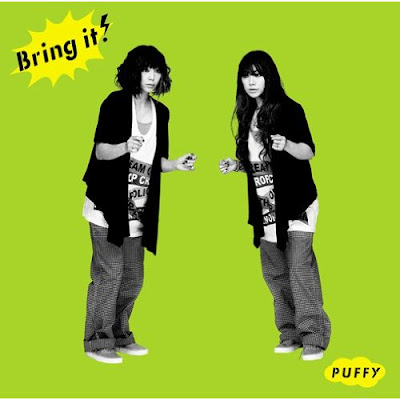 Thoughts? I'm still deciding. I do understand what they're going for, design-wise.

I'll see what else I've missed recently and post any more updates as warranted and as time permits.
Posted by Jeff at 11:18 PM 8 comments: