I am not sure what got things going, but Zard / Izumi Sakai has exploded into streaming... she was arguably the female jpop singer of the 90s and transformed the genre.  If you wonder why I love jpop so much, check this out; https://open.spotify.com/artist/2NKadilSWCwuqGp5QoDeUS 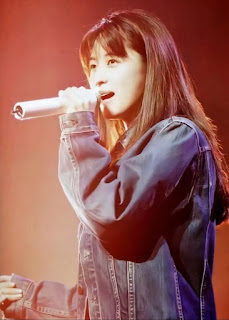 As a note this should have happened years ago, but Japan's music industry is sometimes a decade

behind the US and generally very insular.  They think the music appeals to Japan, but I can assure them jpop/jrock is loved in many places.
Maybe the offshoot of this is that Zard's albums were remastered again* and her 9th album re-arranged.   This could maybe finally bump Zard past Yumi Matsutoya to #2 female soloist in Japan.  No small feat and #1 is 30m more.  We'll see but even #3 is an accomplishment.
So getting to the tetchy subject in jpop of greatest hits, remasters, etc (some of this was taken from
Marty Friedman, so cred to him).  It is a product and labels will constantly shift talent or interest, so if any artist/group hits 3 albums... that is something.
What you see in jpop is a constant stream of compilation albums for artists.
Zard has had a slew of them, about every 5 years.  Puffy(whom I adore and are my #1) has done the same thing.  The different between these releases?  Minimal. Do I buy them? Yes...
The fact of the matter in the in jpop scene breaking up groups into other profitable ventures is normal (Judy And Mary).  In some cases breakups & reformations are another marketing angle (re Luna Sea).  Like lovely packaged Japanese snacks, music is the same.
One of the funny things about my jpop/jrock journey is the number of bands that I love and discovered working my way through the genres that came and gone before I found them.  Sometimes I find one at the "right time." Girlfriendis one of those and after 3 albums: done.
Whatever happened with Girlfriend we'll probably never know. The repackaging for what is next with Mina, Sakika, Mirei and Nagisa I do hope themselves more success.  They have tremendous chops as musicians.  I also half expect a greatest hits album...
Another jpop band with an odd trajectory is Sard Underground, originating as a Zard tribute band... they have grown into their own and out of the long shadow of Izumi Sakai with an original 3rd album and I hope there is not that 3rd album curse.
That's a journey through jpop.  Japanese music is amazing and guys like Marty Friedman touch upon an idea.
Whatever you like, there is an analog in Japan and it is going to sound amazing. Japan doesn't realize you'll like it. You'll have to work to find it and you'll love it!
Posted by Wes at 9:22 AM No comments: