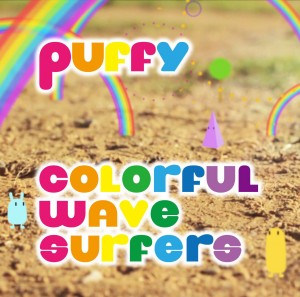 After a hectic few weeks, I finally got a chance to listen to Puffy's new (digital only) single Colorful Wave Surfers.  Pitching in this time is the Okamotos and what we get is a solid but not spectacular single that has the trace elements of a Puffy song and something new.

What makes this a Puffy song that I would expect?  There is a nice layered quality to the instruments and for the most party they are balanced and intertwined.  The piano might be a big heavy handed, but that sort of lends itself to the 70's sound the single is summoning, which again is a well that Puffy successfully goes to. This time focusing on a piano is new and I appreciate that nuanced experiment.

A sticking point for Colorful Wave Surfers lies in that Ami and Yumi's vocals feel a bit overwhelmed by the instruments.  While their vocals are delivered skillfully they lack a bit of range and punch.  Again, not a huge concern just something I noted.

The guitar work is nice though maybe a touch restrained.  That has been a common issue for me with Puffy's singles as of late, but they are there and there is a brief solo. Bass and drums are solid and present a safety net in the song that I find comforting as Puffy has traditionally had great backing in that department.

Engineering wise Colorful Wave Surfers is good and speaks to the fact this is a more serious effort and not a gap filler like some previous singles. The sound is crisp and sounds nice.

The truth is Colorful Wave Surfers is a good single and for fans something that was needed.  After the debacle that was Himitsuno Gimmy Cat Ufufu Hontouyo, my scoring for this single might be skewed, yet my faith has been restored that the odds of Puffy releasing a good album by their 20th anniversary are also better.