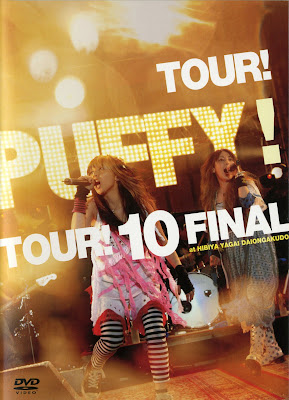 PUFFY obviously have little trouble drawing in American fans to their live shows here. Unfortunately, we've only ever seen a fraction of their music catalog released in the States, and not a single one of their many concert DVD's. That trend looks set to continue with their latest DVD, a live recording of their special May 2006 10th anniversary concert held in Hibiya Park, Tokyo. Consider this, then, a somewhat biased review of the import region 2 DVD release of TOUR! PUFFY! TOUR! 10 FINAL.

A sort of retrospective on their careers to this point, this concert was the culmination of PUFFY's 10th anniversary tour through Japan. It took place at the Hibiya Yagai Ongakudou venue on the exact date that the duo was formed. It's apparently been a long-held dream of theirs to play this particular venue on their 10th anniversary - something they themselves originally gave little chance of happening. Lucky for them and for us as fans, they were proven wrong - dreams do sometimes come true.

I've been fortunate enough to see PUFFY twice in the United States (see my show reports here and here). While they can sometimes be raw and their singing uneven, Ami and Yumi are thoroughly capable of putting on an almost shockingly good live show. Two untrained singers backed by a motley crew of rotating session and tour musicians, they're more likely than not to completely blow away your expectations. There's a lot more substance to PUFFY than many people realize - their music rocks hard in a live setting, and the girls themselves are absolute naturals on stage. Some people were just destined for the limelight. 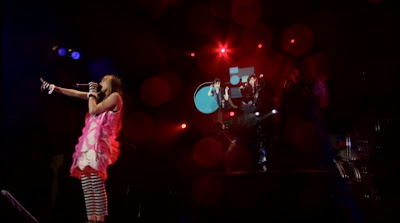 Yumi's a bit better than Ami at hamming it up for the crowd, but each complements the other in style and both have mastered making that personal connection with the audience. 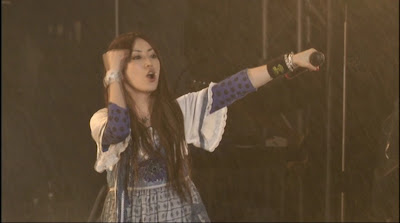 This DVD showcases a side of PUFFY that American fans rarely see - the spectacle of an arena-style concert. PUFFY's fan base in the USA will only support a small club tour, a less formal style that suits them well and that they've embraced wholeheartedly. They "dress down" for the more intimate American shows, their stage and light setups are quite basic, they talk directly to the audience at various points and even physically (and literally) reach out to them when the mood strikes. In Japan, though, they can still fill large arenas, with giant lighted signs straight out of a KISS stage show and even occasional choreography complete with backup dancers. This all puts a bit more literal and metaphorical distance between them and the audience, but it also brings a level of spit-n-polish to the proceedings that will probably feel new to a lot of American fans. 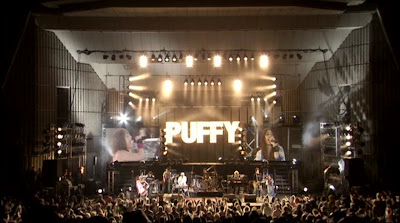 The DVD begins with Ami and Yumi literally hurled into the air from below the stage. It's surprising and actually kind of scary to watch, but it's an ode to tours past - not the first time they've made such an entrance. It's pouring rain in the outdoor venue, but the arena is still packed - each member of the crowd with his or her own PUFFY-provided clear plastic parka. It's kind of an odd sight - like a uniform required for entry. The stage itself is covered, but open in front - various camera angles are consistently covered by rain, and it's obvious that the girls catch some drops themselves as the night goes on. 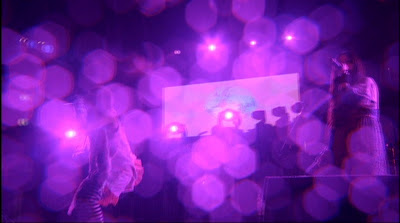 They never let it bother them, though, and neither does the audience - it's the original Woodstock all over again, minus the peace signs.

They open with "Tokusuru Karada", appropriately a hard and heavy track from their first album AmiYumi, and a choice that sets the tone for the evening. Ami and Yumi seem nervous at first, almost tentative. Maybe understandable given how special the night is to them. The feeling continues through their second song "Kore ga Watashi no Ikirumichi" ("That's the Way It Is"), another early track that remains one of their most popular. But by the initial beats of the disco-inspired "Electric Beach Fever", they're loosening up, as are the crowd along with them. Now the real fun begins. 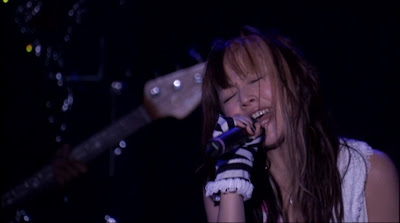 The show continues as a mashup of early hit singles ("MOTHER", Ai no Shirushi"), perennial crowd-pleasers ("Jet Police", "Umi Eto") and recent tracks ("Tokyo I'm On My Way", "Hi Hi") before segueing into an actual, honest-to-god medley in the retrospective tradition. To my knowledge, PUFFY has never played a medley on tour before, and I admit it does sound slightly off hearing their songs chopped up, sliced, diced, and minced, then slammed back together in unnatural ways, but then again, these are songs that they otherwise never play at all. When was the last time anyone can recall hearing PUFFY play "Honey" or "V-A-C-A-T-I-O-N" (two solo songs) live? It's been a while. Seeing some of these songs performed in a new live set brought a smile to my face, even if they weren't the full compositions.

The post-medley portion of the show reads like a second act, and taken up a few notches - now the backup dancers appear and the choreography kicks in full gear for "Hurricane". 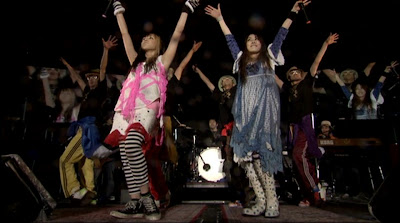 The giant PUFFY sign gets lit up and animated as they push on into "Moguralike", and several members of the Tokyo Ska Paradise Orchestra join Ami and Yumi in a lively rendition of "Boogie Woogie No. 5". The regular set closes with "Wild Girls on Circuit", an older song that's been resurrected in recent shows with a harder edge and heavier guitars. 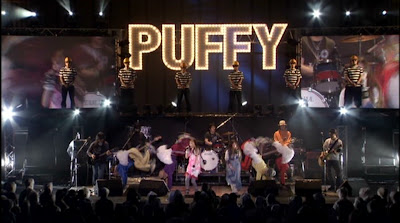 With some close editing, the girls reappear almost immediately for the first set of encores - and they're pretty special. First up is "Tomodachi" ("Friends"), which they sing to a series of photos projected onto the stage screens showing Ami and Yumi together through the years. It's obvious how close they still are. Next is the big spoiler of the evening, as PUFFY's musical mentor Tamio Okuda joins them on stage to one of the biggest ovations of the evening. Looking playfully uncomfortable, he sits down behind the keyboard to help out on the song that started it all, "Ajia no Junshin". 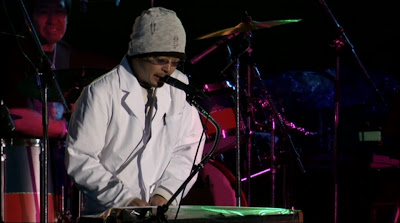 It would have been poetic for the show to close on that note, so it's unclear to me if the second encore was planned or not. In any case, the girls do return again after a clumsy and obvious bit of editing for "Puffy's Rule" - a difficult song to perform live and not one that they ever seem to manage to sing cleanly, but the energy always comes through. The sentiment of the song - that they share everything equally (that is "Puffy's rule") - helps explain their longevity in Japan, so notorious for chewing up and spitting out both pop and rock stars on a revolving basis, and especially female divas. PUFFY are not divas.

Musically, this is probably the best I have ever heard PUFFY in a live setting, either recorded or in person. They sound so good here that I occasionally had to watch their lips to confirm there was no backing track (there wasn't) - almost every song is performed to near perfection, the girls' vocals matching precisely. But there's more to putting on a great show than vocal precision. They weren't this perfect during their August 2005 NYC show and that remains one of the best concerts I've ever seen. While they did seem initially tentative on this DVD, they relaxed as the show progressed, and as always, they maintained their high energy level throughout. I personally still prefer a more intimate setting, but PUFFY connected with the crowd here as well as anyone can in a large arena like this. 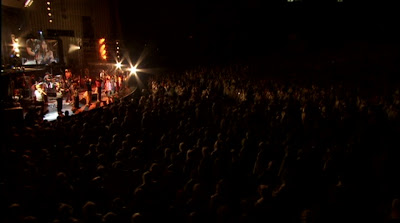 Highlights from the show would probably have to be the songs they rarely ever otherwise perform anymore - "MOTHER", "Hurricane" and "Honey" being examples. Tamio Okuda's entrance and performance during "Ajia no Junshin" was another high point that'll please any PUFFY fan. And then there are the little unplanned moments that make any show memorable - like Yumi unexpectedly handing the microphone to Ami during "V-A-C-A-T-I-O-N" and Ami flubbing the next line. (The look on Ami's face when Yumi sings the same line back at her is priceless.)

The DVD also includes a backstage documentary of the 10th year tour - culminating with the catapult shot onto the stage in Hibiya - and a funny and interesting interview with a full and probably slightly drunk Ami and Yumi at a Tokyo restaurant. These will be pretty impenetrable to most US fans, but they're still fun anyway. 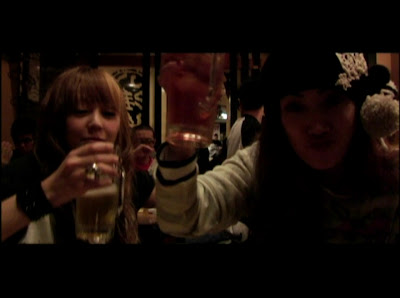 Yumi's always got a beer in hand. (Ami's favored drink appears to be iced tea.) 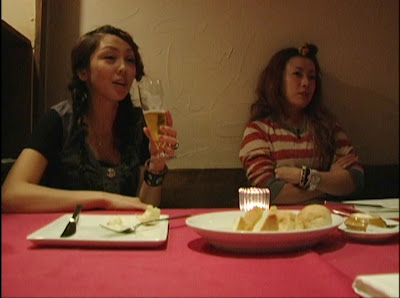 At around $50 for the import, the price of entry here is steep. But this is really a must-have for any PUFFY fan, serious or not. Until we have a proper American DVD, this is really about the best introduction to PUFFY live as you'll find, with a set list that reaches deep into their back catalog. Those who have seen them live here will also get to see a different side - a more dressed-up, more polished and more slickly-produced PUFFY show than we'll probably ever have here. You may prefer a more stripped-down persona (as I do), but there's nothing wrong with variety. And PUFFY's genius is in mastering both the genres and conventions of arena rock *and* indie rock - it's all part of the package, and it's all PUFFY.

The DVD itself is widescreen-enhanced (perhaps a first for them) with the exception of the documentary and restaurant scene. As you can probably tell by my screen captures, the live footage is not encoded progressively, although oddly enough the doc and interview are.