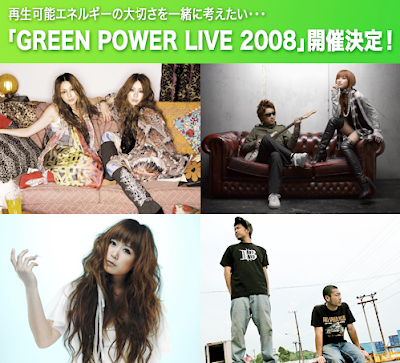 On February 19, PUFFY played the Green Power Live 2008 concert along with mihimaru GT、絢香 (Ayaka)、and J to S. I don't really know any of the other three acts too well, although I've heard some of Ayaka's stuff and saw her CD's for sale when I was in Japan last.

This was a concert held at Zepp Tokyo to promote "green" power to help combat global warming. PUFFY are not really big on politics or issues, but global warming seems to be their cause célèbre.

Anyway, as promised, below are the show reports I've collected so far - and there could be a couple more added over time, you never know. As always, for English speakers, you can try using something like Google Language Tools to translate.

And the few event reports I've found so far (all in Japanese):

The staff diary has a few small photos from the show as well. There are honestly a couple of other little writeups about the evening's festivities out there, but the remaining ones don't even mention Puffy. There were four bands playing, so of course some of the other bands' fans are posting from their perspective only. I'm still debating whether to add these as I find them.

For only about the second time in as long as I've been following them, Ami's official blog has received a software update and gets a new web address along with it. Now, her blog is quite old and was more than due for an upgrade. She's been blogging since at least 1999 - 1997 if you believe the copyright notice! (Those posts don't seem to be archived, if they ever existed.) That's longer than I've been blogging (either here or anywhere else), longer than most people have even known the word "blog". Her blog is so old that some of her fans think "Netscope Amigator" is a play on "Alligator" rather than the old-school web browser Netscape Navigator. She's hardcore. But her relatively ancient blog software was clearly holding her back. She'd been complaining recently that it was too hard for her to upload photos, and there was no RSS feed for fans to keep track of when she updates.

Well, the new blog hopefully remedies all that - you can at least see that she's got two RSS and one Atom feed now, so she can now push out posts to subscribers. It seems to be based on the same software that the staff diary uses. Hopefully we'll also get some more photos now too!

A few more vids, plus an update or two

A week or two ago I mentioned a video I'd seen of longtime Puffy producer Tamio Okuda singing "Mother", which I'd failed to locate again afterwards. Well, TofuUnion, a Puffy fan from Japan, was nice enough to send me the link. Oddly enough, YouTube is telling me I've already linked to it! Maybe it's in one of the comments here, but I haven't seen it.

The video actually starts out as a tribute to Okuda, which is worth watching too as it includes both AmiYumi and Kimura Kaela. But his live version of "Mother" afterwards is really quite moving.


I may as well also post a couple of other links that he sent me, including a rare Puffy live performance of Unicorn's "Subarashii Hibi".


I really don't know what's up with him singing so many Puffy songs. Yeah, he wrote them for Puffy, but come on! Wild Girls on Circuit? Some songs just aren't meant to be sung by a middle-aged man.

Puffy have occasionally covered Tamio's songs as well. Yeah, technically *all* the songs he wrote for them are covers, but not really. Here they are from their first tour singing Unicorn's final single "Subarashii Hibi":


Ok! Now, a few quick updates. Tonight, Puffy played Green Power Live, a show with a few other bands, and I'll be looking around for show reports and will post them if I find them. Other than that, there hasn't been a lot of big news coming out of Japan lately - so I've been watching Amazon and checking my email from their US publicity agency for any word of the impending US album release. Nothing yet. Rest assured I'm on the case. They do seem to be taking their sweet time, which may point to the possibility of one or more extras being prepared for the US release. But we'll have to see.
Posted by Jeff at 9:38 PM 1 comment:

PUFFY on the Cover of InRed (again)

A little late in posting this, but PUFFY made the cover of InRed again - that magazine obviously loves our girls! 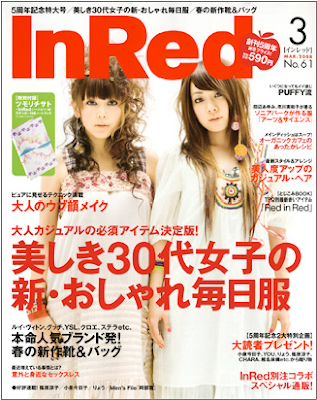 I swear I was watching the InRed site like a hawk the day of this issue's alleged launch, but they were slow to update... and then I forgot about it. Sorry! Here are a few shots from the inside (scanned by one of their Japanese fans) to make up for it: 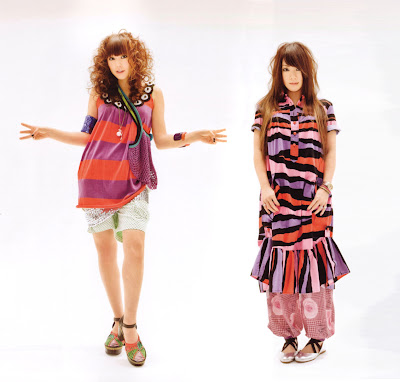 Yumi showing some leg! Unusual for her. 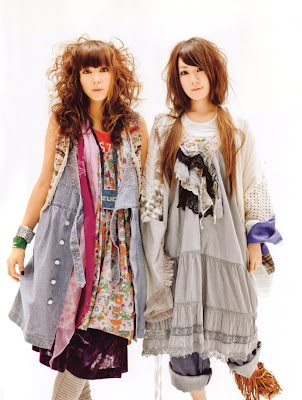 Photos like these make it easy to have a Puffy blog. I don't even need to make an effort - my homepage always looks good.
Posted by Jeff at 7:37 AM 3 comments:


I've seen other videos of him singing this song, and it just doesn't sound right to me. When PUFFY sings it, it sounds total punk. Tamio's too laid back for this song. He's too mellow.

The second song he sings sounds more like his own style... I'm guessing because it is.

One day I'll post the video of him singing "Mother" acoustic live in front of 60,000 people - that's probably my favorite Tamio Okuda performance of a PUFFY song. Now if only I could find it again...
Posted by Jeff at 3:44 PM 1 comment: 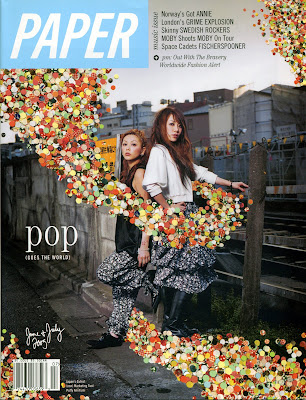 This is three years old now, but I'm posting it for a few reasons:

a) Nobody else seems to have it up anywhere. Their Japanese magazine covers are all over the internet, but the biggest American magazine cover story they've ever had is nowhere to be found.

b) As mentioned, it was, in my opinion, the biggest PR coup they've had in this country so far. Yes, bigger than the Thanksgiving parade. PAPER is a lot more targeted at the people who might actually buy their albums.

c) With honeycreeper about to get a US release, it might eventually end up being fun to look back and see if anything's changed about how they're presenting themselves here.

Go ahead and click that image. There's a much bigger version behind it.

For those living outside the US, or too young to be reading it yet, PAPER Magazine is a New York City-based indie culture mag. Their web site is here. This is a magazine intended for twenty-something hipsters living in Williamsburg and going to NYU. I mean, it's hopefully a little broader than that in practice, but that's the type, that's the demographic they're writing for. It's got a monthly circulation of nearly 600,000, all over the country. So Puffy making the cover was a big deal. This was a direct appeal to the indie crowd that they were trying to cultivate from around 2003-2005.

The issue itself was a look at pop music from around the world, not just Puffy and not just Japan - but they chose Puffy for the cover, probably thanks to their looks and their US cartoon. Not all of the articles (including Puffy's) are entirely flattering - they're not fluff pieces, they're meant to be an honest appraisal. Puffy's article in fact has some of the same inaccuracies that I've touched upon before, and calls them out for a lack of "credibility" due to their commercial endorsements.

Still, I think this is the kind of thing they need more of here, and I have no doubt that some people read this and thought "they're cute, they're indie rock, they're Japanese, I'm gonna check 'em out." There is a market for that, as PAPER themselves point out - Cibo Matto, Pizzicato Five, etc. The criticisms really don't matter; exposure to the right kind of crowd is what matters. And some of the things Puffy themselves say in the article are pretty interesting and enlightening - and ditto for their A&R rep. This is probably the most honest they've been in a US interview. (One example: they don't care about the Hi Hi cartoon, though both they and Sam Register had hoped it would cross over to older fans a-la Pee Wee's Playhouse.)

Ok, enough teasing. You want to read it? Here it is on PAPER's web site. Or, if you want to see it exactly as it was in the magazine (more or less), complete with big photos, Santa Claus has brought you a PDF. Be warned - it's 8.5MB in size. Better have a fast connection.

Incidentally, this wasn't the first time Puffy appeared in PAPER. In 2001, the mag did a short blurb on the upcoming SPIKE, complete with a mini-interview and a (small) photo I haven't seen anywhere else. Check it out.

J! Ent on the Honeysweeper Tour 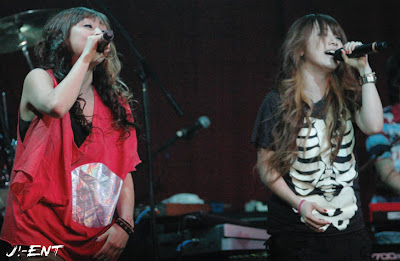 Gadzooks! This one almost got by me!

J! Ent managed to get a photographer in to Puffy's House of Blues show in California last year, and they've now compiled their best photos from the show into a downloadable PDF. These are probably the largest photos you're going to see from the Honeysweeper tour, so git downloading!

While you're at the J! Ent site, check out all of their past interviews with the girls - they've been talking to them nearly every year since 2000.

By the way... I've been itching to do one of my longer, more in-depth posts - just haven't had time lately. Maybe this weekend! (Update: Forgot about the Super Bowl. I'll write something soon, though.)
Posted by Jeff at 5:43 AM 4 comments: