CHECK IT: This post originally appeared on my other blog Alphabet City, so the context in parts may seem a little unnecessary. Just bear in mind that if anything sounds weird given where you are, this originally was not on a Puffy-dedicated blog.

I wanted to write up a few words about tonight's Puffy AmiYumi concert here in NYC (or just "Puffy" if you're a purist - they're still called that in Japan). It was a fantastic show and I don't think I can even sleep without telling it to the world.

For anyone that's not familiar with them or only knows them from their Cartoon Network show (such as most of us backward Americans!), Puffy is a female duo from Japan whose music runs the gamut from rock to pop to punk and everywhere in between. They've sold millions of records worldwide and are practically national icons in their home country. Their influences are obvious, and are almost transparent in many of their songs - ELO, The Who, The Ramones, ABBA, and more - all mashed together to a pulp and then spit back out with a truly unique Japanese interpretation. Their latest stuff is a bit harder and heavier than their early albums but they still manage to mix in a few outright disco numbers when the mood strikes - and it's this eclecticism that attracted me to them, along with many of their other fans on both sides of the Pacific.

They rose to fame in part because they are the exact opposite of most pop music acts in Japan - unpredictable, un-pre-packaged and at times raw, though always producing music so catchy that just one listen is enough to lodge it in your head for weeks. They now have four total US albums and somewhere close to ten (or more?) in Japan, along with countless EP's, DVD's, and singles. They seem to have gotten a foothold here now with their cartoon, but I'm not sure the image the TV show has given them in the US is entirely the one they wanted as it differs quite a bit from their image abroad. That's the thing with Puffy, though - whatever their image is at any given time, that's truly who they are. And it's all good.

The crowd at this concert was unlike any that I've ever seen before at a rock show. I've been to other Japanese concerts in NYC - Dreams Come True was the last - and it's almost always a pretty normal, almost 100% Japanese crowd. This show was different, obviously in part because of success of the cartoon, in part because of their current musical style (more punk than pop), and in part because of their undeniable attractiveness. It was the most mixed crowd I've ever seen, with all ages represented from about 10 years old on up (the kids with parents in tow!), an equal number of men and women, and an almost equal number of Japanese, American, and other Asian nationalities.

Many people in the crowd had obviously never been to any sort of show like this before. My wife heard one Japanese couple wondering where their seats were. I heard a group of young American girls asking the same question. (It was general admission - there are no seats at Irving Plaza.) Nobody seemed to realize what kind of a wait they were in for - unlike at most American shows I've been to, everybody crowded right up to the stage almost immediately. This left us no choice but to do the same, meaning we stood in one place for close to two hours through the initial setup and opening act (Adam Richman) before Puffy even showed up. These people need to learn how American concerts work!

We did manage to get pretty close - I was five heads deep from the stage, my wife got as close as four. (That would be about six feet, I'd guess.) It was close enough to see every little dimple on Yumi's face, and easily close enough to catch a few glances from her during the performance - Yumi was the closest to our side. I'm 6'4" tall so I'm pretty accustomed to performers making eye contact when I'm that close to the stage, but I admit this time it did put me a little off-guard. I did have a totally unobstructed view - yeah, we had a pretty good spot. 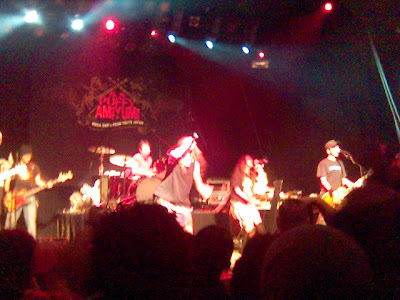 Sorry, that's the best shot I could get with my crappy cell phone! I'm posting this for no other reason than to prove I was there - my view was better than this (I was holding the phone low to avoid security) and Yumi was normally a bit closer.

Here's a better photo I found elsewhere on the net taken at almost exactly the same time by a girl who was standing right next to me (funny what a small world it is): 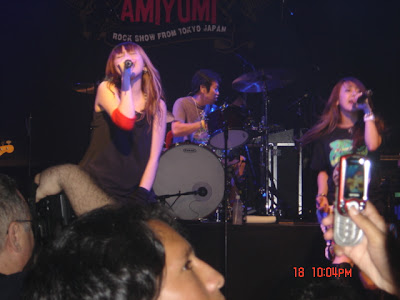 The opening act was pretty forgettable but Puffy was even better than I'd expected. I've seen videos of their shows in the past, so I've seen how they pretty much just slink around on stage whenever they're not singing, often with their heads down, as if they're some sort of British shoegazer band from the early 90's.

They were not like that tonight. They smiled almost all the way through the set; they were jumping around, heads up, at the front of the stage, even both walking in front of the monitors to shake hands with the crowd at various points. I half-expected one or both of them to attempt a stage dive at one point. They were really into it, and that put the crowd in a good mood, and if you've ever been to any sort of rock concert you know that the back-and-forth between audience and performer in that kind of situation just feeds upon itself. Things only got better and better as the night went on. By the end of the final encore - of course, the song that started it all way back in 1996, "Asia no Junshin" - the connection between the girls and the crowd was pretty much complete, and the entire room was literally jumping.

(Here's an official page of photos that shows some of the show - though apparently their photographer and I own the same camera-phone!

Just for reference, here's a page with some wallpaper links made from a somewhat better shot of them performing in Japan this past July.)

Ami has since posted in her blog that this was their best show ever up to this point. Even if you can't read Japanese, you may still want to click that link as she's got still more decent photos from earlier shows a bit down the page (though none from New York).

They played a long set - I wasn't keeping count but it must have been near 15 songs, plus encores. They'd play five or so songs in a row and then take a little break to banter with the crowd, in both Japanese and English, with the English all written out by hand on little notepad paper. They talked about going shopping in New York and eating Italian food, and Yumi did her little shtick about it being "ka-ra-o-ke" and not "carry-okee" like she's done on the cartoon and at various other times. A few morons in the audience got impatient with this at various points, and shouted things like "get on with it!" but I'm not sure how serious they were and in any case they were either booed down or ignored. (At one point, Ami called one of these guys "baka" to Yumi, knowing he wouldn't understand, but much of the crowd did and she got a good laugh.) These guys didn't quite get the point that these are not seventeen year-old girls on stage - they're both in their thirties, and they obviously needed a breather once in a while. I love hearing Ami and Yumi chat, though, and especially when it's pointed at least generally in my direction as part of the audience, so I actually enjoyed the downtime.

Their set was heavy. These girls have gone punk, no doubt about it - though you never know with them, they could tire of this approach tomorrow. The opening song was "Urei", probably the heaviest song they've ever recorded. They played basically all of their even semi-popular heavy songs and only a few of their lighter tunes - each of which was practically obligatory. (You just can't have a Puffy concert without "Boogie Woogie #5", "Tokyo Nights" or "Asia no Junshin" - this is what their older fans come to see.) Even the lighter tunes were infused with an extra dose of distorted guitar, though. And one of their encores - which they called their "favorite song" - was a cover of Green Day's "Basket Case".

Here's the set list, at least as far as I remember it (please feel free to email corrections; I may have missed one or two or gotten the order a bit wrong):

I certainly have no problem with their newfound punkiness, but I'm not sure all of their Japanese fans even knew some of the songs they were playing. And you get the feeling they're doing what they want to be doing now, not what their producer or record label wants them to be doing. I think it's great.

If you're wondering, yes, they did sing various songs in English, though not even all of the ones that have been re-recorded that way. "Basket Case" was obviously sung in English. "Friends Forever" was sung in English but with the original Japanese vocal arrangement (including the "hey! hey!" at the end, which was used for audience participation). "Red Swing" ("Planet Tokyo") was sung in Japanese. "Asia no Junshin" ("True Asia") was sung in Japanese. "Love So Pure" was sung in English. There didn't seem to be much rhyme or reason to it - my guess is they just sung in whatever language they felt most comfortable with for a given song. I swear at one point Yumi turned to Ami in between songs and said "English?" Though I don't remember which song that exchange preceded.

I picked up one of their concert t-shirts, which are pretty cool - very understated, almost esoteric. 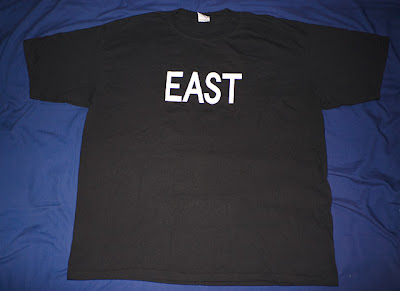 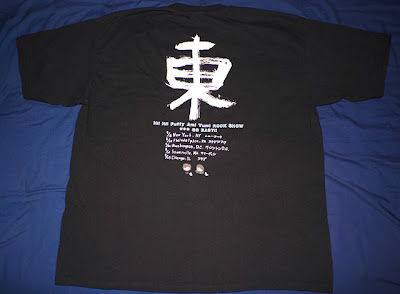 Might be a bit hard to see but there are little caricatures of the girls on the bottom of the back of the shirt - you can click each image for a (slightly) larger view. If you're wondering, the kanji just says "EAST" in Japanese. I really like this design - it is not too obvious, and it's one of those things that people will look at and wonder what the hell it means. I don't like wearing obvious advertising, so this is a perfect tour shirt. For those who care about such things, Puffy themselves also wore this shirt during their encore.

They were filming the show, and had big signs out saying "THIS CONCERT IS BEING FILMED - YOU MAY APPEAR IN THE FOOTAGE", so hopefully they'll release at least parts of it on DVD or as a bonus on their next CD. I can't wait. 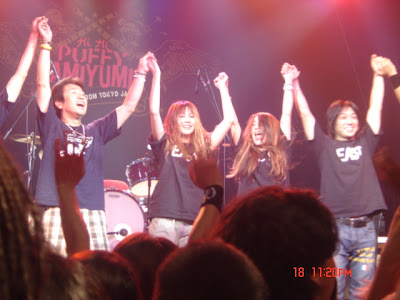 UPDATE: Read my show report from the July 11, 2006 Puffy concert at the NYC River to River festival here.