Puffy Covers is a little more than a week away... and in the spirit of celebrating it's upcoming release; more covers!

My hunch is this is from a secondary school's annual festival (as seen in the film Linda Linda Linda... which if you have not seen... SEE IT!)... and neither are really well executed. But I do like the fact that there are two vocalists and they seem to have a bit of fun with their stage routine.

And this is not even the end of covers to come!
Posted by Wes at 6:04 PM No comments:

Not a lot going on at the moment (that should be a hint for me to bang out some album reviews... but I am beat). However I stumbled across this little gem on Youku.

While great news about Yumi's forthcoming child, I suspect this might be a quiet year unless Ami goes into over drive with her side work... or like Yumi did and shoulder the load for the duo until the duo is back on the same page.

Also in this lull, I am probably going to spruce up Amiyumidas with a redesign... but I do have the layout backed up just in case. :)
Posted by Wes at 6:20 PM No comments:

Straight from Puffy's website, here is a look at the cover for Puffy Covers*. 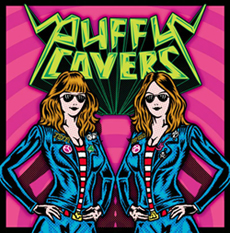 My initial take was that it reminds me of a Donna's album cover. Maybe a little like a comic book, but to me it is a cross between underground music magazine and velvet black light poster.**


Here is a bigger alt from Puffy's site...

Was scrounging around the web today for Puffy stuff (and it is pretty quiet...) and came across some new information for PUFFY COVERS via Tokyo Hive.  So credit to them for the news, which to me was interesting as a significant number of the Puffy cover songs are new recordings.

Here are the tracks that are new recordings:


PUFFY COVERS will be released on July 4th, 2012.  So it may be possible for anyone using the FedEx options we might be delayed by a day.

P.S.  For Amiyumidas readers, if you buy from CD Japan, please use the banner links on the right, it helps support the site at zero cost to you!

P.P.S.  Put a new version of "Tomodachi no Wao!" in a blog a few back... Sony applied the hammer to the one from Daily Motion... never mind how dumb is it a promotional video  gets pulled for a copyright complaint as that sort of defeats the purpose... anyways Youku once again came through, which even with short ads it remains a very useful video site for amiyumidas.
Posted by Wes at 12:44 PM No comments: