Not a whole lot going on now that translates to blogging about Puffy. Which is only odd because they have a tour going on and new album out... that doesn't mean I didn't find anything...

I found this very early TV rendition of Asia No Junshin that I had never seen. It really hammers home what a great and lengthy career Ami and Yumi have had.

Doing some housekeeping for the site this week.... then I guess I will have to do some more album review features.
Posted by Wes at 6:19 PM No comments:

Off camera, an all girl band is formed to play for the annual autumn festival, which in Japan is a very big deal. Literally the school drops everything so students can do performances, set up food stalls, compete in athletics, declare love and display exhibits. Think every big and important event in an American high school condensed into a few days, double so for seniors as this is their last hurrah.

Still off camera, the lead guitarist Moe has injures her finger while playing basketball and lead singer Rinko jettisons her from the band. Keyboardist Kei (Yu Kashii) takes great exception to this and breaks up the band. The passive aggressive similarities between Kai and Rinko play out through the movie, but their differences are also stark. As Kei has a drive that Rinko does not possess. Kei takes drummer Kyoko (Aki Meada) and Nozomi (Shiori Sekine) and begins to cobble a band together… but Kei has to shift from keyboards to guitar and she cannot play and sing.

Kei needs a singer and new song selections and she has three days to pull it all together. That it the film right there. My wife was amused and dejected that this was the entire plot. To me a well told simple story is better than a complex story that is poorly told. The plot is air tight. Nobuhiro Yamashita’s direction of scenes are primarily static shots and they are very well executed and often emotively stirring… which gets us back into the film.

Linda^3 is set sometime around 2005, Kei, Kyoko and Nozomi are discussing music options while flipping through minidiscs in the school’s music practice room. Many options are rattled off by the pair, some get a pause for consideration others not so much. Kyoko offers up Puffy for consideration and Kei quickly tells her to be serious. As Kei is a keyboardist that surprised me, but then again maybe she knew Puffy’s arrangements are usually complicated and driven by guitar work she could not handle and the keyboards she had to abandon. They find an old cassette containing songs by The Blue Hearts (a band which Puffy has covered on several occasions) which proves to be the musical spark Kei was looking for.

The trio needs a singer and this leads to my favorite scene in Linda^3. Kei, Kyoko and Nozomi are sitting in the school’s grounds wondering who to pick as a lead singer. Kei decides that the first person who walks past will be the one. First person to walk by is a dorky, chubby and disheveled male student looking to buy something from a vending machine. Kyoko asks if they should pick a girl, Kei quickly answers yes. Next to walk by is Rinko… they decide to ask her but she and Kei passive aggressively dance around each other. One needs, the other does not want and questions the new direction, yet probably needs it too. Kei’s drive wins out and she makes a decision.

Walking down the stairs at the far end of the school and carrying a box is Son (Doona Bae), a Korean exchange student who is set up earlier as more than a bit isolated and lonely in her Japanese school (given the long standing disagreements and mores between Korea and Japan this is not a surprise).

Kei yells to Son, asking if she wants to sing in a band. Son yells back, yes. Kyoko rushes across the school to explain what Kei really asked. All we really hear is abject shock from Son, whose Japanese is rough around the edges. Whatever misgivings she has seem to boil away at the chance of making friends. What comes around is that Son needs the band too. Maybe more than Kei. Son who had tremendous trepidation winds up wanting this more than the rest as evident when Nozomi forgets her bass and she insists they retrieve it regardless if they are late, regardless of the monsoon rains at the end of the film. Son also dubs the band Paranmaum, which in Korean translates to Blue Hearts. 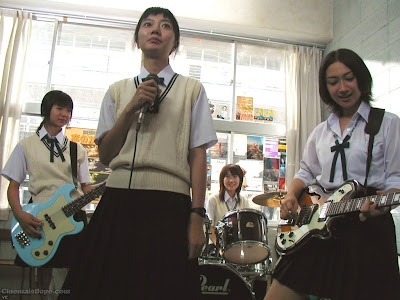 For a Japanese film, Bae Do Na (who is Korean) steals the show and runs away with it. She is given most of the funny lines and there are a couple of scenes that are priceless and she delivers a very soulful performance as a fish out of water. Her scene at the karaoke bar is another part of the film she knocks out of the park.

Kei Tachibana the former keyboardist and untried guitarist is played by Yu Kashii . Her character is, as Son describes, scary but sweet and is more worldly and has a life outside of secondary school. She has older boyfriends and performs music in local venues and like many young Japanese artists she has dreams of Tokyo… as the film takes place in the Japanese equivalent of Kansas. Kei also learned guitar specifically for this role.

Aki Meada plays the drummer Kyoko. At this point of all the principle actors on the set in Linda^3 she is the most experienced and accomplished. Her career has certainly had some ups and downs. Kyoko comes from a reasonably well off family and is the emotional glue of the group. Like Yu, Aki learned to play drums specifically for Linda^3.

Shiori Sekine plays Nozomi who is a Japanese every girl character. She slightly belittles Son’s Japanese, scolds the other girls for spending too much on a group dinner and demure. Shiori’s performance on the surface is wooden, but I think there are some subtlties therein. She does have a few gems of scenes of her own. What many viewers many not realize is she is not an actress per se as this is Shiori's first film. She is the bassist for Base Ball Bear. In the music the band plays, it becomes apparent, she is the most talented musician of the bunch. The sad part is she does not sing, which from her work in Base Ball Bear it is apparent she is a good singer. Also her band Base Ball Bear was formed for a secondary school festival… they liked it so much they continued as a band. The rest is history… 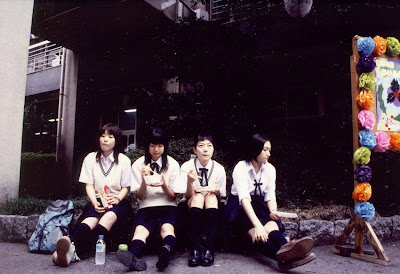 I will not discuss any more of Linda^3 until the end scenes… which are what I saw first. I was skimming YouTube for videos. As it turns out Puffy’s cover of Oranai Uta is also covered by the band that Son coins the name Paranmaum, which is Korean for Blue Heart ala The Blue Hearts. They play two songs at the festival the previous and Linda Linda. Both are superbly played and completely listenable outside of the context of the film.

The performance scene uses a lot of angles and reaction shots. These make more sense after the movie particularly when it comes to a wistful teacher, dejected boys, an excited girl and a very relaxed Moe.

As the performance is about to start Nozomi and Kyoko are ready, Kei then looks to Son who appears to be scared beyond belief. Kei delivers a stare than were it to physically manifest would push Son off the stage… but in that Kei gives a reassuring nod. And. They. Are. Off. First with Linda Linda then Owaranai Uta.

Linda^3 cuts to black before the second song is over. Like the abrupt start of the film, whose circumstances are filled in as it goes along it ends in the perfect spot. The movie wasn’t about these girls’ dreams, friendships or finishing their senior year. Linda^3 was about getting to this spot in time.

The music in Linda^3 is a combination of an original score by American-Japanese musician James Iha (formerly of Smashing Pumpkins), songs by the cast and Japanese rock-pop. Songs by Base Ball Bear are also included, so you hear Shiori Sekine play in two bands… It is all great and well worth acquiring for your music library.

Linda Linda Linda is not burdened by an expansive plot, but it is executed well and the payoff in the end is satisfying and deeply touching like few movies I have watched. This isn’t just a movie that I like, it is a movie that likes me.

Email ThisBlogThis!Share to TwitterShare to FacebookShare to Pinterest
Labels: dvd and video reviews

Once in a while in my dredging for Puffy material I find something darn interesting. I would not have bet Ami and Yumi ever did Love So Pure live, slightly less so were it Violet that I stumbled across.
A funny thing happened while driving around last week with my older daughter, we were listening to Jet Love and she came to the conclusion there were at least two different songs combined there. I could not have been more proud as we have never discussed the structure of Puffy songs.

Not a hole lot of news worthy stuff I have been able to find. Ami and Yumi are involved with disaster relief stuff, which does not surprise me, but as always if you have a scoop post it in the comments and I will follow up.

P.S. No word from amiyumidas founder Jeff and believe me I have tried. I was really hoping for his take on Thank You, as it is his writing that got me inspired to contribute to this blog.

P.P.S. Big hat tip to OP for the vidcap.