Here is the promotional video for "Tomodachi no Wow!"

I like the video quite a bit, it is the fun style of video Puffy has done well with over the years. The vocal deliveries are really quite exceptional and I do not mind that they are slightly over produced. "Tomodachi no Wow!" is a synth heavy song... to the point I am not sure if a drum machine is being used. While it makes "Sunrise" seem organic by comparison, the track is solid yet cute.

I am not sure when the video was shot, but my feel is that this was fairly recent as Yumi looks pregnant, thought the costumes do quite a bit to hide this. I really admire that, entertainment is a business that (for better or worse) based on looks, luckily she is positively glowing as a mom to be.

Over all I guess I like "Tomodachi no Wow!" which given I eschew towards the more rocking Puffy songs probably says quite a bit.


P.S. My friend Noriko-chan was over tonight and her interpretation of the song title was "Circle of Friends"


(h/t to the always resourceful hareonna20)
Posted by Wes at 9:29 AM No comments:

Here is "Tomodachi no Wow!" from the end of "Shimajiro no Wao!"

Still a month away from the release of "Tomodachi no Wow!" on 5/23. As has been mentioned in comments the single is being used for the end credits for the children's program "Shimajiro no Wao!" (rather good timing considering Yumi is due to be a mom).

I did some scrounging and translations for the track list (and will correct this as better information becomes available):

The deluxe edition comes with sheet music and a DVD of the video. The sheet music is an interesting touch, but to me this is somewhat lackluster deluxe single.  I think the best deluxe singles Puffy has released have been with songs from concerts.  The price delta is about 335 yen (or a touch over four dollars), so there is not much of a push to pick the deluxe over the single based on what I see.

On first blush I am not sure if four versions of "Tomodachi no Wow!" are enough to get me excited about the single. However I am willing to be proven wrong and I am looking forward to hearing the song.
Posted by Wes at 4:58 PM No comments:

Great news from Puffy! Yumi is going to be a mother this summer!

Having children is perhaps the most challenging thing we can do in this life, it is also often the most personally rewarding. I am overjoyed for Yumi and her husband and wish then all the best! 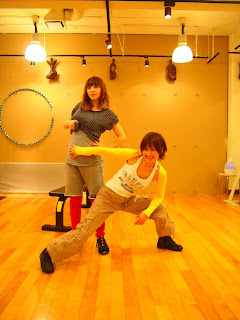 Yumi is well along and looking quite healthy via the fitness blog a guest posted shared in comments.

I figured this would be a possibility in the very near term, and according to jpopasia Yumi is planning on doing all things Puffy for the time being. Ami showed that parenting and Puffy can operate in harmony, so I am not too worried about the future of Puffy.

P.S. I can surmise so many people know about my being a fan of Puffy that several people threw this news item my way today!(photo credit to Curvy Body)
Posted by Wes at 8:18 PM No comments: