Yumi's in a New Movie

Yumi Yoshimura's set to star in the Japanese remake of "Knockin' on Heaven's Door" simply called "Heaven's Door", set for release February 7. It's a small part - some have called it a "cameo" - although she's got her own page on the web site's "cast" section (pictured above). No mention on IMDB, though.

The original film's about a couple of criminals suffering from an incurable disease who basically go on a cross-country crime spree before one of them dies. The remake replaces the two adult male protagonists with one adult male and one 14 year old girl. (What else? It is Japan.) I'm not sure what role Yumi's playing, but perhaps the Japanese text up there tells us - if I find out later, I'll update.

For those new to the whole Puffy thing, this is not the first movie role for Yumi - IMDB lists four previous acting stints. That includes her starring role in "The Neighbor No. 13", in which she played the female lead. She's really a pretty good actress. A versatile artiste!
Posted by Jeff at 11:40 AM No comments: 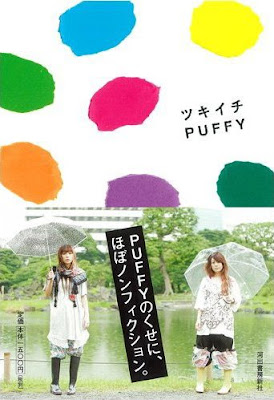 Puffy's official site was updated a few days ago with news that the book "Tsuki Ichi" will contain 30 total essays (including 6 new ones) and 200 pages. It sounds like there's also some sort of pre-order bonus photo, though no doubt only for those in Japan (maybe if you order overseas from a major retailer).

The only decent place I've found to order this from the United States is HMV Japan. CD Japan and YesAsia apparently aren't carrying it, and Amazon wants $30 in shipping on a $15 book. HMV charges a still-high but somewhat more reasonable 1200 yen for shipping, or about $12.

I'll do a full writeup once I receive it - hopefully close to the December 1 release date.
Posted by Jeff at 11:09 AM No comments:

I posted about this show back in August, but at that time all I had was a little photo, a set list and show report. Well, how about the performance itself? Some kind soul has granted your wish:


Doesn't appear to be all of it - it's missing two songs ("Basket Case" and "Kore ga Watashi no Ikirumichi"). But still, at almost 20 minutes, it seems to be worth your while. Honestly, I can't really tell as my new computer is now in the shop and I'm typing this on an ancient Celeron PC that can't even play Veoh or YouTube video. I can see little snippets before it hitches up and freezes. Sigh.
Posted by Jeff at 6:14 PM 3 comments:

So I got my new computer and it's defective! Or at least built like crap. Click the link for the full story and photos. It's going back to IBM/Lenovo. So my posting might still be a little sporadic until I get it back. (I have it right now, but it's probably getting re-packed up tomorrow.)

Anyway, one tidbit of news is that Puffy will be on the cover of InRed magazine next month. I'm pretty sure their English blog translation is wrong - it's not the December issue (which is out now), it's the issue coming out in December. That would be the January issue.

InRed loves Puffy. But I doubt they're being put on the cover for nothing. Think they'll have something to promote? I think so. And hopefully not just a book. Maybe even more than a single.
Posted by Jeff at 9:34 PM No comments:

New computer on its way!

Posted on my other blog, but relevant here too:

Fresh off the build line in China. I wonder if it'll come complete with photos of the iPhone girl (er, Thinkpad girl?).

It's been hard to post to this blog lately because the computer I've been using since my own laptop broke doesn't even have a DVD drive and is much too slow to do anything like encode video. It can deal with photos, but painfully. So most of the types of posts I usually put up during the in-between periods, like my own encoded videos, haven't really been possible.

I should have my shiny new Thinkpad tomorrow. Can't wait to be back in business!
Posted by Jeff at 8:32 AM No comments:


Tough to judge anything from 15 seconds, but it sounds like it could be fun in the context of an album. Doesn't have the feel of a song that really stands on its own. We'll see how they actually release it.

Sounds pretty garage, actually, which could be really cool. But I've gotta hear more before I can really say one way or another.
Posted by Jeff at 6:40 PM 1 comment: