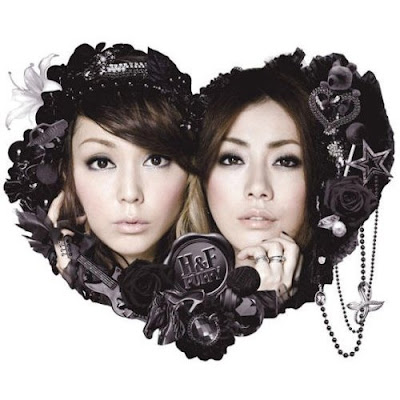 This review comes a bit late, I know, with this release having been on store shelves for more than a month now. I had originally planned on not reviewing it at all, being a "best of" release - what criteria do you judge such an album by? It is, of course, intended to be their "best" songs, though coming from all different albums they form no cohesive whole. Like all such "best" releases, then, this album is basically a known quantity: the new home to many of PUFFY's greatest songs, a good starting point for any new fan and a nostalgic reminder for any old fan, on a CD that lacks an identity of its own.

What changed my mind about doing this review were three things: 1) the fact that few true English-language reviews of this CD exist on the net, 2) the inclusion of a couple of "new" songs on the CD, and 3) the sheer number of visitors I get - including a decent number of repeat visitors who I can only guess are looking for some kind of update. This one's for you guys.

Hit & Fun is PUFFY's second greatest hits compilation in Japan in ten years, although the Hi Hi Puffy AmiYumi soundtrack might also fall in that category. So they changed it up a bit and tried something different this time, opening up the song selection to public vote and making this CD a "fan's choice". For a short time, their web site allowed visitors to select three of their favorite PUFFY songs and explain their reasons for choosing them, with the top 20 tracks destined for immortality on Hit & Fun. Released on Valentine's Day, the album was intended as a gift to those same fans. (Of course, that's provided you paid your cash money for this "gift"!)

Whether this was a true democratic process or simply a publicity stunt is anyone's guess, and the resulting track listing is mostly predictable, but with a few genuine surprises. The full track list appears below:

In addition, the Limited Edition version of the album comes with a bonus mini-CD containing four songs:

The mini-CD might not seem to have much of interest to American fans, but it's still notable in that "Call Me What You Like" has had a slight rework in its arrangement, and their cover of "Basket Case" is not available on any US album. This live version is also far superior to the somewhat weak-kneed album track we got on Japan's release of Splurge. It's a song they kick out live, and they sound great here.

The track list for the main CD is mostly what any PUFFY fan would expect, leaning heavily on newer material and including all of the single tracks they've released sans-album since Splurge. "Hataraku Otoko", for example, was the theme song to the anime of the same name. "Hazimu Rizumu" was a one-off collaboration with the Tokyo Ska Paradise Orchestra (who they also worked with on "Boogie Woogie No. 5"). And the contentiously-titled "Oto Memoriaru" was a backing track for a cosmetics ad in which PUFFY appeared. (The kana used in the Japanese title intentionally obfuscates what the translation should be. It could have several different meanings - the lyrics suggest to me that it should be "Memorial Song".)

These newer songs are all good, and catchy as all get-out like any proper PUFFY song should be, although "Oto Memoriaru" and even "Hataraku Otoko" - an old Tamio Okuda/Unicorn song - are a bit heavy on the power-pop side. Maybe it's just the production, but I sense that PUFFY seems to be moving out of their punk-ish phase that started with Spike and continued through much of Splurge, reinventing themselves once again, this time going for glam. The cover of the CD itself suggests that as well, as does their new ad campaign with cosmetics-maker Lavshuca.

I'm ambivalent about this. On the one hand, this is not the first time PUFFY have remade both their look and sound, nor will it probably be their last. And in every phase they've gone through so far, they've made some fantastic music and made their style all their own. They're also both in their thirties and probably going for a more mature look, knowing their fans have now grown up along with them - and that's perfectly understandable.

But something about seeing them in cosmetic ads like any other Japanese pop star doesn't quite feel right. Neither does seeing Lavshuca marketing all over this CD's jacket and PUFFY's own official web site. (The web site campaign mercifully seems to be over.) This is new - this is not something they've done before, selling both themselves and their music for advertising, and so blatantly using their looks as a marketing tool. It's hard to use a loaded term like "selling out" when you're talking about an act that has always been pop, has always appeared in various marketing campaigns and has always relied on outside songwriters. But they have always done pop their own way, they've never relied on outside stylists, and they've maintained whatever the Japanese equivalent of "street cred" is. Up to this point, they've been real iconoclasts in Japanese pop and rock music. I don't think they're in danger of losing that yet, but we'll have to see how far they take this new, more traditionally mainstream image and new way of doing business.

Getting back to the track listing, there are some legitimate surprises mixed in with the old standards and new singles. Who would have predicted "Hito ni Yasashiku" would carry the torch for The Hit Parade, especially at the expense of hit song and tour staple "Hurricane"? Or "Invisible Tomorrow" - one of their best songs, but not really one of their most popular in Japan, which collectively never really warmed up to Andy Sturmer's songwriting. Remember, PUFFY is 100% mainstream in Japan (Hit & Fun itself debuted at #9 on the charts), and this song is a cult hit at best. I've gotta say the same about "Umi Eto", one of my favorite PUFFY songs and seemingly one of theirs too, as it's been included on every tour since its release. But this is a noisy punk song that I never would have predicted as a top 20 vote getter, given their long rap sheet of more popular, radio-friendly hit singles. (What, no "Mother"?)

I don't personally consider this a true "best-of" album and I doubt most other PUFFY fans would either. But then, that's true of similar albums from other major artists as well - it's just impossible to summarize a large body of work in one catch-all album. I do think there's enough new stuff here to make it a worthwhile pickup for true fans, and there's enough good stuff here to make for a decent introduction for anyone looking to give PUFFY a try for the first time. But when every single PUFFY album has at least 5 or 6 truly classic songs on it, how do you represent 10 years worth of prolific output in 20 tracks? Fact is, you can't. This CD is worth buying, but unless your collection is otherwise complete, don't make the mistake of thinking this is a substitute for checking out their previous work.
Posted by Jeff at 9:09 PM No comments: