Chameleon Diamonds In The Rough

Just a couple of videos that I came across while mining for Puffy material. The end results may be a touch rough, but I really admire these kids trying to wrangle Puffy songs.


Unrelated notes... A full RGW single review will be done over the weekend, so look for that next week. I have a slew of reviews in process that I will hopefully firm up when I have the end of the month off from my day gig.
Posted by Wes at 1:41 PM No comments:

The new Puffy single RGW dropped last week and I finally got around to seeing the PV for it via YouTube. I have a few thoughts on RGW but I have not picked up the single yet. While mostly for the DVD, the other tracks may be songs I will wind up liking more. That is a different blog for a different day.

To start, it has been far too long since Tamio did anything with Puffy, so it is really exciting to see him working with Ami and Yumi again. I have mentioned in previous blogs there has been something missing with Puffy’s recent songs and that it Tamio. 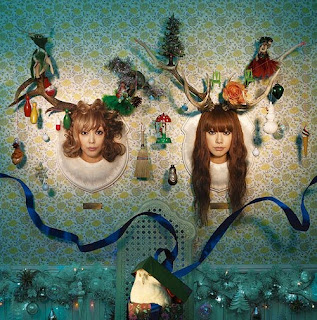 Musically RGW tilts towards a rocking Christmas song, which is my personal preference for Puffy songs. The instrumentation is what I come to expect with a Tamio song, which is to say a layered, expressive and precise song that makes generous call backs to sounds of the past. Ami and Yumi deliver a straightforward and well harmonized duet but in the chorus it feels as if they are listing lyrics rather than belting them out. There is a nice balance that is struck, but I there are better Puffy/Tamio songs where both instruments and singing were both stellar (Oriental Diamond comes to mind).

Visually RGW is very much an inverted Tokyo I’m On My Way via the use of a black rotating stage combined with Mogura Like’s physical performances. There is a ribbon of plot with a little girl celebrating Christmas with the help of Ami and Yumi. It is sweet to the point of making my teeth ache, but way more chipper than Aoi Namida. The production design for RGW is simple and I think that it works well.

After watching RGW a few times, I am really starting to miss Ami and Yumi’s shapeless plaid jumpsuits circa Fever*Fever. I realize it is only a video and they are performers and costumes must be worn… but stylish hobo does not work for me. The rest of the costuming is great for the video and completely literal. If they sing out pink, a pink costume is forthcoming. This might be why they are dressed in patchwork, they might get lost in the color of the other performers.
Here is the video… until Song decides it has been on Yahoo long enough…