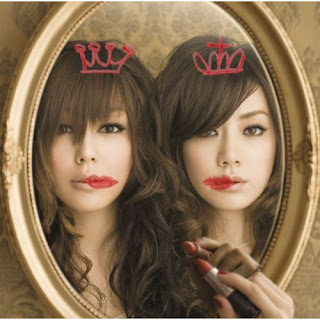 Now this is a PUFFY single. I was a little worried after "All Because of You" that they'd gone off the rails in a whole new direction dominated by drum machines and software-modified vocals. But they're back to basics here with two guitar tracks that would have fit like a glove on pretty much any PUFFY album this side of Spike.

The CD
You've probably seen the video for the title track (and if not, it's below) so there's not a lot I can tell you that you don't already know. But I love the song, and I haven't been a huge fan of Hellgren and Myhr's PUFFY songs to this point (from what I remember, that includes boom boom beat and Oto Memoriaru). I felt they were missing something; they sounded a little too formulaic, almost machine-made, and "boom boom beat", at least, was almost tuneless to my ears. Definitely not one of my favorite PUFFY songs.

I wouldn't say this one is either yet, but it definitely sounds like a real PUFFY track, and in fact it reminds me a lot of the Andy Sturmer era. In fact, in some ways it reminds me specifically of "Akai Buranko" - something about the chord progression during the chorus, and the production and construction of the song. That's one of the highest compliments I could pay - "Akai Buranko" is one of my favorite PUFFY songs.

I've been assured also that the lyrics do not sound ridiculous to a Japanese person. So, there's that too, I guess.

The "b-side" (do people still call them that in the digital era?), written by the pillows' Sawao Yamanaka, is fine... I'd say perfectly adequate... but it doesn't have the soaring quality of "My Story". It's a pretty straightforward, somewhat lighter song that harkens back to earlier PUFFY. It also reminds me of a specific song: "Green Apple", another of my favorites, this one from Spike. "Green Apple" takes some more unexpected twists and turns, and it's got more of a cuteness to it than "Twilight Shooting Star", but they somehow seem to end up in the same place at the end of the chorus. And the way the girls sing it sounds very similar - it makes me feel like we're back to 2000 all over again.

As for the "All Because of You" remix... well, the kindest thing I can say is that it sounds nothing like the original. It seems a little early to be getting remixes of this track to begin with, but no doubt they just needed a bit of filler to jack the track listing up by 50%. It's not a track I'm planning to listen to much.

The DVD
What I was most excited about on the new single was four more live tracks on Volume 2 of the Shibuya AX show DVD. I really love this marketing plan they came up with for this series of releases - it seems like in the end we're going to end up with what amounts to a full live DVD for a total premium over the regular editions of about six bucks. That's amazing.

The four tracks on this volume include two new songs (from honeycreeper) and two classics. It's interesting to watch the girls' body language during the songs, which might be a good indicator of which are their favorites. ("Sayonara Summer" doesn't seem to be one of them.) I'm a huge Yumi fan but I'm still just transfixed by Ami on this DVD, like I was on the earlier volume from the same show. She really seems to be dredging up some dark thoughts from deep inside her soul during parts of this show - and she stares dead-on at the camera much of the time. I think it's beautiful. I never thought I'd be talking about Ami's penetrating gaze, but just look at this: 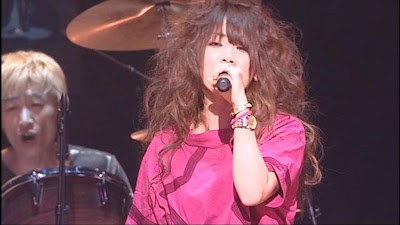 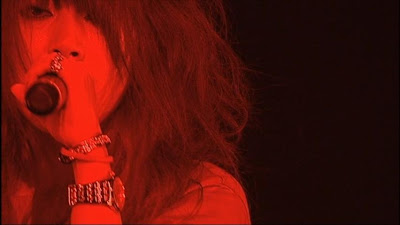 She's got me hypnotized. That's from two separate songs, by the way. She's literally standing there, singing to the camera. Very weird... but I can't look away. She must have been in some kind of a mood that night.

They come alive during "Oriental Diamond", which they really seem to enjoy. And they sing it well - I'm always amazed at how precise their singing is live these days, even when jumping around. It seems like more often than not, they sound better live than they do on their albums.

This show seemed a little more stripped-down than some of theirs that I've seen from Japan (it's definitely not as complex of a stage show as the 10th anniversary concert on Tour! Puffy! Tour! 10), but they did get a video screen going during "Oriental Diamond". Their rendition of "Akai Buranko", a song that often seems to give them fits when singing live, is probably the best I've ever heard it on this DVD. This must be a hard song to sing - they're often out of tune with each other, and they always sound exhausted by the end of it, but not here. As usual, the song is lit completely in red. ("Red Swing" - get it?) 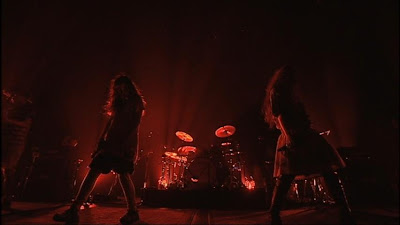 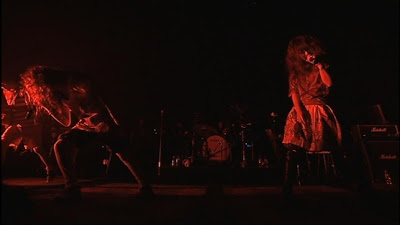 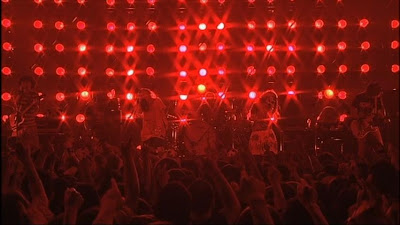 If I never see PUFFY in person again (which will be a tragedy in itself), one of my big regrets is that I never got to see them play "Nagisa ni Matsuwaru etc." live. They didn't play it at either show I went to - in fact, they cut it out of my show specifically in 2006. They played it everywhere else on that tour.

This song was obviously part of their early shows, and now serves as an anchor, usually near the open or close of the show. And it serves as the audience participation song, with Ami and Yumi letting the crowd sing some of the choruses. More importantly, they really have fun singing it - it's obvious that they're in no way sick of this song. They love it. And that always makes it fun to watch. 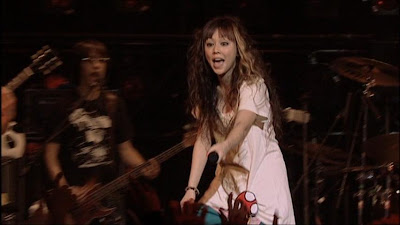 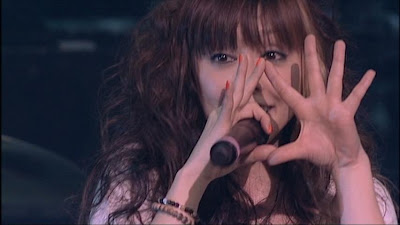 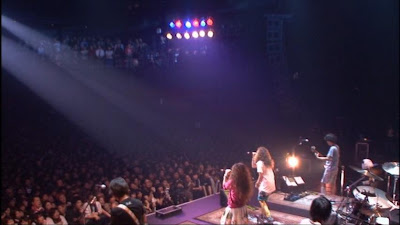 One more photo - the hair brigade: 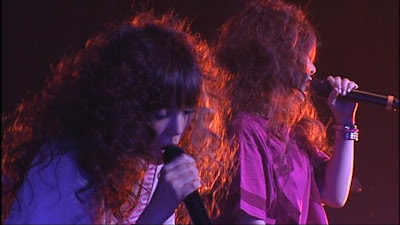 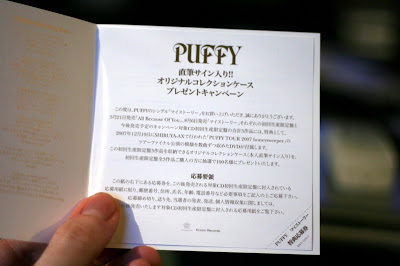 One of these was also included with the "All Because of You" limited edition DVD. It's telling you that there's going to be a lottery for a special autographed case after all three volumes of the live DVD are out - you just need to send in your proof of purchase for all three CD's. Not sure if it's open to US residents, but probably not. I've got a Japanese address that I can use, so I'll probably go for it. The form to mail in is going to be included with the next CD. (And it doesn't say "single" or "album", just "CD". But my guess is it'll be an album, given the rest of what we've been hearing.)

Final grades:
Music: A-
Performance: A
Production: A

Here's the video for "My Story" if you haven't seen it: