As I am still in a holding pattern for getting "Puffy Covers," I decided to circle back and review Puffy's most recent single "Tomodachi no Wao!" I can, however, promise this is not going to be a long review as all four songs are variants of the title track, which are as follows: 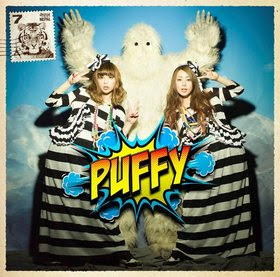 It took a little while for "Tomodachi no Wao!"* (to grow on me. It is not exactly in my round house so far Puffy songs as there is not a guitar anywhere in site and all instruments are synthesizer or programmed. This includes Ami and Yumi's vocals at times (specifically when they sing "wao"), which is an effect I do generally like. To me the instrumentals at times drift towards a Caribbean sound and the song has a playful and nice feel.

Over all the production is polished with Ami and Yumi delivering the good vocals I come to expect. This might be one of those songs you will never hear live or it will be heavily tweaked for a concert. The later piques my interest, the former would not surprise me. Whereas this is good, the rest of the singledoes not deliver the same kind of satisfaction.

Remember how I said "Wake Up, Make Up" was the absolutely worst thing Puffy has ever done? I stand corrected. "Tomodachi no Wao! (Shimajirou to Asobo! Version)" is abysmal and arguably the wrost thing I have ever heard credited to Puffy ("Girls Just Wanna Have Fun" cover also eclipses this track). For whatever reason someone thought it a good idea to have Shimajiro** screaching/yelling/singing into Ami and Yumi's vocals along with random sound effects interspersed throughout the song. To top of all this, the track is a remix, which to me is always a dubious prospect. While some guitars are added in, that is not enough to sway my opinion.

Maybe "Tomodachi no Wao! (Shimajirou to Asobo! Version)" was only included as a cross marketing effort for the TV show and to appeal to kids... and that is what I have decided to tell myself... and Ami and Yumi had to take one for the team. Which happens as Japanese media is far more amalgamated than the US.

Padding out the album is the instrumental version of "Tomodachi no Wao!" which is a common add on to Japanese singles. It plays fair-to-mid on its own, but a hook is missing as the instrumentals are not to the compelling part of the title track.
The final track is "Tomodachi no Wao! (TV size)," which is to the title track as to what fun size candy bars are to regular candy bars. All the basic goodness is contained within, it is not enough to be satisfying.

I had a difficult time with "Tomodachi no Wao!" once the title track was over. It is a good song and definitely a different song with it being backed entirely synthesizer and a vaguely Caribbean feel at times. The rest of the single comes off feeling like a forced and padded effort. Puffy has had better singles in recent years. If this is what we are left with while Yumi is on hiatus, it is something of a down note that makes me eager for the day Puffy kicks it back into high gear.

* per my friend Noriko-chan this translated to to circle of friends)
** from the show ‘Shimajiro no Wao!‘ of which "Tomodachi no Wao!" is the end credits music
Posted by Wes at 10:11 PM No comments:

Puffy fans waited almost two years for "Jet" after the release of their EP "amiyumi". Certainly "solosolo" filled the gap, but what was Yumi's solo tracks bolted onto Ami's Sony demos. Jet is different that the prior Puffy efforts and is the fulcrum in which thier careers have been hammered out.

The entirety of Jet is produced by Tamio Okuda, whose unique relationship with Puffy is illustrated on "Jet" as he also had a hand writing the music or lyrics for a majority of the tracks. Yosui Inoue is also in the mix, who in his own right is a legendary musician and his work with Tamio is also very notable. At this stage Ami and Yumi are not credited with much of the writing on Jet. 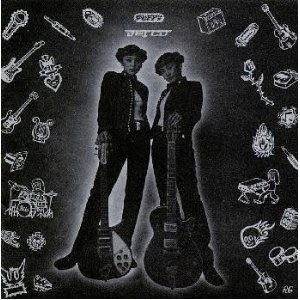 Two years is a very long time in the entertainment industry, double so for the Japanese music industry. What took so long between "amiyumi" and "Jet"? Perhaps it was the suddenness of Puffy becoming popular and Sony being caught out of position. I think there is more to it than that. My hunch is it took two years for Yumi to learn how to sing. Listen carefully to "amiyumi" and "solosolo"then listen to "Jet". I can mark her progression as a vocalist. Ami did a lot of the heavy lifting in amiyumi and Yumi still had some rough edges in "solosolo". Ami could always sing given her talent level from the start has been at a higher technical level, but "Jet" is where Yumi begins to shine and combine the two... and that is Puffy.

There is a reason why "Jet Keisatsu" has been on virtually every concert set list of Puffy's since "Jet," and that is because it is a sing that fire on all cylinders. The sythesizer solo in the intro and the rolling wave sound followed by guitars kicking in and then Ami and Yumi's remarkable vocal delivery. Everything works and almost 15 years later that remains the case. It is also notable that "Jet Keisatsu" plays incredibly well live... which leads us to the next track which was alos written entirely by Tamio Okuda.

"Kore ga Watashi no Ikirumichi" is a throwback track and showcases Ami and Yumi differently as they spend a lot more time taking turns singing at the start and singing in harmony for the back half of the track. As with many of Tamio's tracks, Tamio can make something new sound familiar, something that on the surface sounds like it was written a continent away that upon a scratch bleeds Japanese. "Jet" is stacked with two very solid tracks... but do good things come in threes?

No... "Cake Is Love" is a song to me that falls a little flat. Vocally it is delivered well and it is composed of material that Shonen Knife seemingly made entire albums. I realize I am more of a fan of Puffy's guitar driven songs, but "Cake Is Love" feels like layers of synthesizers from drums on up. Ami and Yumi deliver with their vocals, but the song is too sweet for my taste.

"Ai no Shirushi" was written by Masamune Kusano of Spitz, which in turn released the song about a year later. It is interesting to note, that while both versions are arranged differently... they are both great. Puffy's is heavy with the bass drum and Spitz' is more guitar driven. Where "Jet Keisatsu" is a song I love live or in the studio... "Ai no Shirushi" is one that is a great studio track, but to me it never plays well live... especially in a large venue. I would like to see Puffy perform this in a more closed in setting if given the chance as I think it plays better for a small room than an arena.

"Haru no Asa" is kind of a stereotypical slow tempo Japanese song, but Ami and Yumi deliver really strong vocals and save the song.

The first solo track, Ami's "Yellow Kid" is a jazzy effort that shows off her singing skills. It is not my cup of tea, but there is no arguing how talent Ami is.

" Kobijin" is a weird off tempo song. It feels rollicking, experimental and progressive that mimics some of the (very few) prog-rock albums that I own. I probably appreciate "Kobijin" more than I like it...

Snapping us back into more familiar Puffy territory is "Nehorina Hahorina." If I recall from Puffy's old site for the launch of "An Illustrated History" that the title is completely nonsensical. Mostly pop, but with enough horns to tilt slightly towards ska. "Nehorina Hahorina" is a fun song.

"Tetsugaku" is Yumi's solo track and I do not believe it is one she could have sung previously. Her skill as a singer was dramatically coached up over the prior two years. Of the two solo tracks, I like this "Tetsugaku" better but it is a very brief song almost acting as a bring for the back third of "Jet".

Rounding the corner is "De Rio" which I is a mid-tempo rocker that I have always lied because Yumi sounds like she is doing most of the singing, which again is something that would not have happened in the first two smaller installments of Puffy.

"Circuit no Musume" is another track written by Tamio (who also recorded the song himself, I think as a demo or b-track). Ami and Yumi deliver fun vocal performances with the music having a beach-throwback sound.

In some ways "Nagisa ni Matsuwaru Et Cetera" makes up for "Cake Is Love". It remains a pop song, but the arrangement is a lot less synthetic, perhaps courtest of Tamio pitching in for the music writing. It is a very poppy affair, but a nice effort.

There are some songs one wonders why the original writer let get away and "Mother" falls straight into that camp. Ami delivers vocals that are ridiculously good, but Yumi's vocals show how far she had come as a vocalist. Both are well balanced against the other, which with "Jet Keisatsu" bookends "Jet" with its two best tracks. There is so much to love about this song outside of Ami and Yumi's vocals, the country undertones and the fact that it is "life is a mother" and not "I have a very nice mother" has always amused me.

I have said it before, any effort by Puffy with Tamio in the mix is likely going to be one I like. A lot. "Jet" being produced by Tamio who in turn was instrumental for most of the tracks makes "Jet" an incredibly focused and consistent album. A few tracks fall flat, but those are all but overwhlemed by "Mother" and "Jet Keisatsu" which are arguably not just the best songs on "Jet" but in Puffy's entire catalog to date.

For someone wanting to get to know Puffy via one original album, "Jet" is the one to go with. We can head Ami and Yumi at the top of their game but also know that the music in this album all but sets the tone for their successful and lengthy career in the often unforgiving Japanese music scene.

Overall Scores:
Singing: A+
Instruments: A
Production: A+

(As always I remain grateful to Peace. Pop. Puffy. for track information)