Best Of The Best Of: Part Two 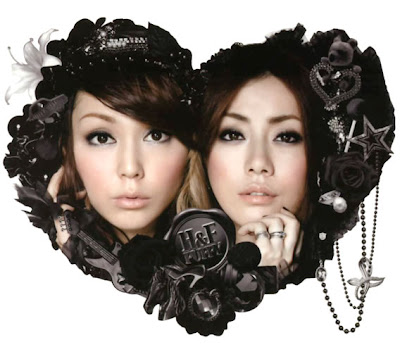 “Hit & Fun” mostly covers the albums from “Spike” through “Honeycreeper” and I think this is a great selection of songs for the period of time between the aforementioned albums.  On the main disc, “Otomemoriaru” is the only new song added to the disk, but it is a really great song and highlights what Ami and Yumi can achieve vocally that almost no other artists can.    The bonus disc from the limited edition of “Hit & Fun” adds a couple of English language tracks, a remix and a live cover of Green Day’s “Basketcase.”  For a small amount more, that bonus disc really bumps up “Hit & Fun” as a compilation CD and barring a monstrous compilation cd this would be towards the top… which is what happened with the release of “15”.

Grading
Selection: A
Packaging: B+
Value: A (A+ with bonus cd)
Overall: A 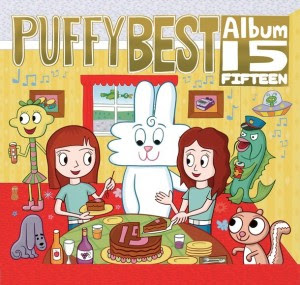 Puffy celebrates their fifteen year anniversary with the release of “15” and it is a monstrous double disc release that eats every previous release for dinner.  If someone asked me “What best of album Puffy’s should I buy?” I would without hesitation say this is the one.  Rodney Greenblat makes a welcome return to doing a Puffy album cover and interior art.  This in itself is a greatest hits of his previous Puffy singles covers.  The twin disk set is packaged in a cardboard slipcase that really adds to the special nature of this compilation.  Additionally the limited edition included a towel with Greenblat’s art and that was well worth the few hundred extra yen.  The bonus DVD is not a big deal, though the Ami Yumi Emi version of "Asia no Junshin" is fun.

“15” covers Puffy’s career arc in a way no other compilation has to date save “Jet Fever.”

As in my review of “15” I will note that some albums are disproportionately represented, specifically “Bring it!” which arguably Puffy’s weakest release.  I will say this is counter balanced by the inclusion or “Urei” which is not just a great song, it is one of Puffy’s greatest songs and deserving of being included in this retrospective.

Anyways "15" is probably the best place to start for anyone looking to discover Puffy and it is a staggering release when factoring in every component of this compilation.

Grading
Selection: A+
Packaging: A+
Value: A
Overall: A+
Posted by Wes at 7:58 AM No comments:

Best Of The Best Of: Part One

This has been rattling around in my brain for a while.  Puffy has a fair number of compilation / best of albums over the course of their career.  I thought it would be curious to see what the best of the best of were and see how they compare.  The is by no means a comprehensive fine toothed comb review, but we can get into those kids of details as a discussion.  I will be covering this in three parts and with that...

If I were judging “Jet Fever” at the time it was released I would say it was more a capitalization on Puffy fever than a compilation people should run out to get as fans would likely have the underlying albums (“Puffy”, SoloSolo”, “Jet” and “Fever*Fever”).  Time, however, changes perception and for someone discovering Puffy “Jet Fever” covers a lot of ground in one release and could be a good pick up.

The addition of two Chinese language tracks is fun, but as my wife puts it they are not executed well in a linguistic sense, whereas Puffy’s  English songs are usually almost as good as their Japanese counterparts.
The album art is much driven by Rodney Greenblat, whose images of Puffy still remain connected to Ami and Yumi today.

Overall I would say “Jet Fever” is a great disc to pickup as it is a comprehensive collection of Puffy’s early songs.

Grading
Selection: B+
Packaging: A
Value: A
Overall: B+ There is a soft spot in my heart for “An Illustrated History” as it is the first Puffy album I purchased and I’d say it covers the early portion of Puffy’s  adequately, but mostly focuses on Jet and Fever*Fever.  It is definitely an brief introduction to Puffy and definitely paint by numbers.  “Love So Pure” and the remix of “Ai no Shirushi” are probably the interesting choices, as the former was a b-side and the later from PRMX (which is not a great album, but this remix is quite good).

However as fond as I am of “An Illustrated History” is probably is not a must have save on the used CD market in the US it can be had for about five bucks so with that consideration it is worth a flyer. The only reasons I bought “Hi Hi Puffy AmiYumi” is that I am a completist and Sony was offering a poster autographed by Ami and Yumi for ordering direct from Sony’s website.   Three versions of “Hi Hi Puffy Amiyumi” are included on the album, which is a song which for me is on the bottom tier of Puffy songs.  There are a number of songs shared between “Hi Hi Puffy AmiYumi” and an “Illustrated History” which seems like a lost opportunity to introduce other songs by Puffy instead of similar ones.  I did like the additions of “Sunrise” and “Into The Beach” but that is not enough to really bump me off my opinion that this is at the bottom rung for Puffy compilations.


Grading
Selection: C
Packaging: C
Value: C- (A+ with the autographed poster)
Posted by Wes at 8:36 PM No comments: