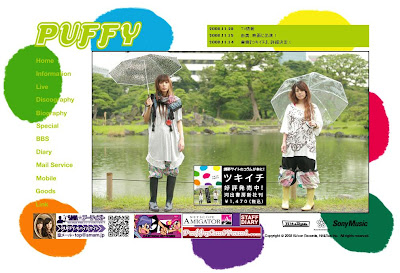 The latest official site update. They seem to be promoting "Tsukiichi" a little more heavily than I would have expected - makes me think that any new music is probably still at least a month away. They really do seem to be spending an inordinate amount of time in the studio lately - it's been at least several months already, by my count. Not to mention the meetings. They've gotta be planning something more than a book signing tour...

Nothing much new to the site besides the homepage, although there are a few earlier things in there that I had missed (an "All Because of You" special, and some tour goods). In fact, many of the sections are coming up broken for me, although they may be fixed by the time you visit.

By the way, I did get the book today. I'll write it up a little later, but honestly, it might be something that most western fans are going to want to pass on. It's pretty text-heavy.
Posted by Jeff at 11:51 AM