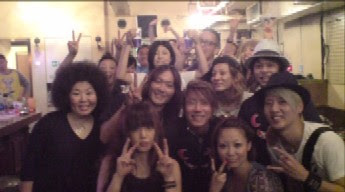 Just a couple little things today, so kind of a tapas bar buffet of a post here.

Hiro from the band Ketchup Mania has posted a little report to her blog about their show with Yumi's band CQA the other night. There's not much about the show itself, but Hiro seems to like Yumi a lot and she's got some cute cell phone pics from backstage.

There's a little more detailed of an actual show report from someone at Sumairu Puffy - sorry, I can't figure out how to link directly to a post there, so you'll have to just scroll down a bit. (Or even hit subsequent pages, depending on when you read this.) It's post #2193. It's in Japanese, of course, and no pictures.

Also! Puffy's appearance with Ai Otsuka and Avril Lavigne at the Tokyo Dome for Avril's "Best Damn Tour" was Sept. 16, the day before the CQA show. Most of the reports I've seen around the net naturally focus exclusively on Avril, as it was her show, but I found this little nugget (in English!) that mentions Ai and Puffy played just 5 songs and that there were around 35,000 in attendance. Not a sell-out at the 55,000-capacity stadium. Kind of lends credence to the theory that Ai and Puffy were brought in to try to boost sagging ticket sales in their home market - this stadium's probably just too big for Avril.

And lastly but certainly not leastly, Ami Onuki turns 35 today. Happy birthday Ami! Watch the official blogs for more on that - I'm sure they'll post party bits any second now. (Here's a cute picture of Ami and her balloons at Amigator.)
Posted by Jeff at 12:20 PM