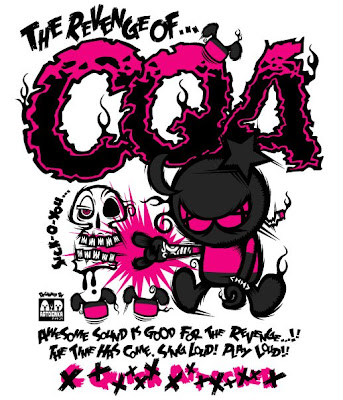 CQA have posted some tiny little photos of their show a week or so ago to their web site. They're so small that I almost didn't bother mentioning them, but there are definitely some good shots of Yumi in the mix. How cute does she look here?

I'm still desperate to get some of their merchandise. (Nobody answered my earlier plea, not that I really expected anyone to. It was worth a shot.) It's all designed by Artdenka, which is an up and coming Japanese design team specializing in this whole "goth kawaii" thing. You can buy their "Skullbox" toy figure here. You can see more of their t-shirt designs at their Flickr page. Their real web site is under construction, but it's here if you feel like looking.

Supposedly CQA are going to be selling stuff via their web site soon, but most likely it'll be Japan-only. (Update: they started. And yeah, only for Japan.)

Also, another show report from the night, though I warn you that I have no idea what this person's saying. Auto-translation is no help whatsoever in this case. Ditto for this other report, though I gather there's a set list there and that it included some sort of cover of a song by Kyoko Koizumi (though not "Nantettatte Idol"). And I think somebody must be a fan of Spongebob Squarepants, but I won't hold that against them.
Posted by Jeff at 6:07 PM